Posted by savonsurauttelijat on elokuu 3, 2018 0 Comments

We started the journey soon after 7am andboth of us had quite good night sleep but woke up before the alarm. There is lot to see on the trip so we were both excited.

We met in the usual place with cloudy weather with just a couple of drops of water falling from the sky. We decided to start without the rin suits and took off at 7:30. 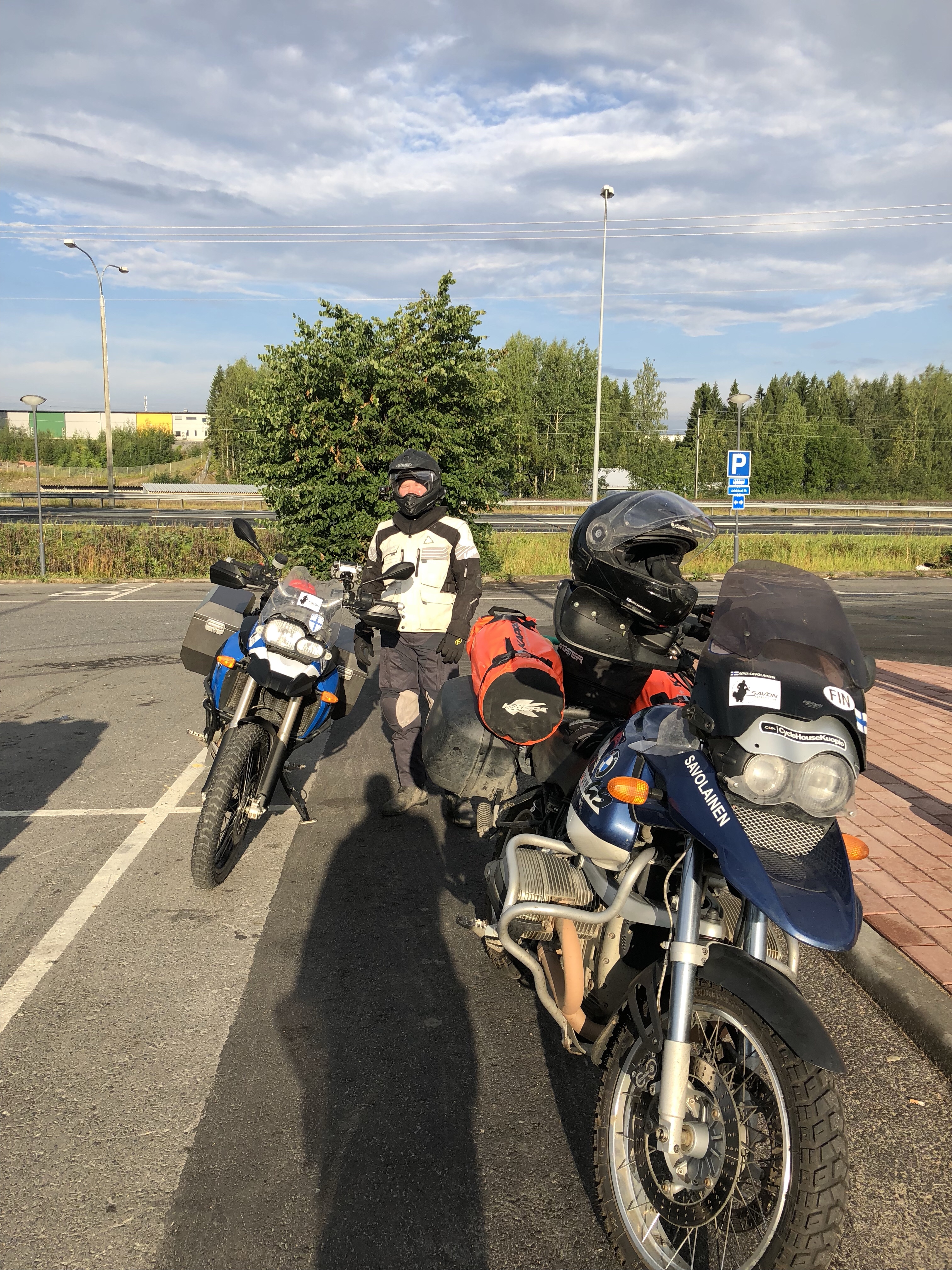 We switched on the Transit mode right away and kept the average speed on good levels. Mika was leading the duo and he was caught on speed camera…lets see if the texts on the bike will be visible in the official picture. Overall we were not really speeding. We had basically one turn on the whole way (about 270km) to the border and still we managed to miss that. Took a very short detour and got back on the route. We rode the whole way without stops.

At the border, when arriving to Russian side, Mika almost rode through a checkpont but immediately stopped when the border official yeled to him loudly. This happened because just some weeks back, on other border crossing point they had guided him through without stopping. No problems caused by this and we continued to the passport check and customs. 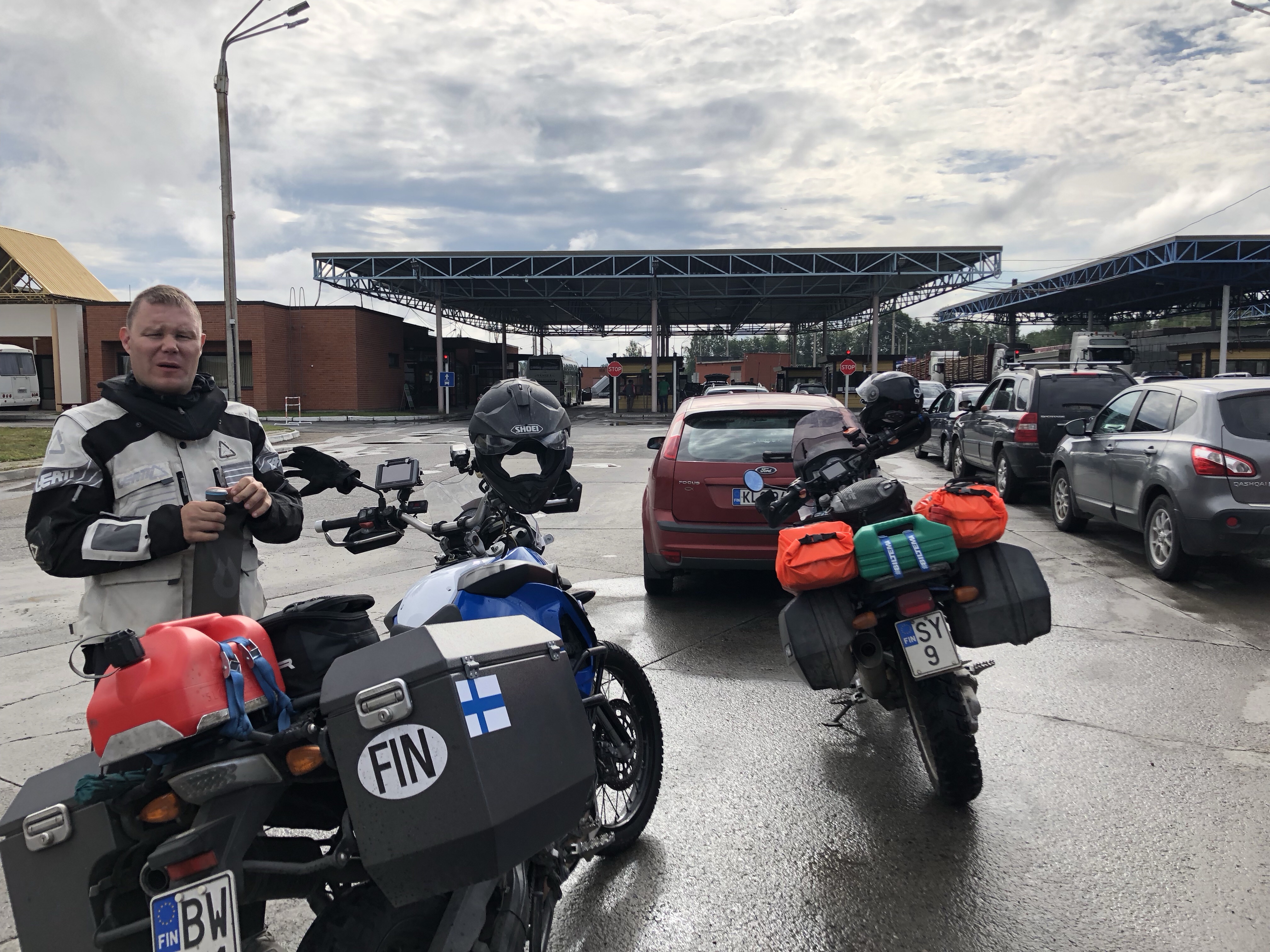 Everything went rather smoothly even though we had to manually fill the migration card, unlike when Mika was on the previous trip when on that border they just printed the card for him.

The check of the luggage was as usual and only problem is that when Mika needs to open the side panniers, he has to remove the dry bag from the top of the pannier and that takes a bit of time. The border officials were nice even though not so much smalltalk happened 🙂

While in the queue at the border, we met a nice Finnish man, who helped us to find good place to get some cash and guidance for purchasing local SIM card with internet connectivity everywhere in Russia. We filled up the bikes and soon took off again. 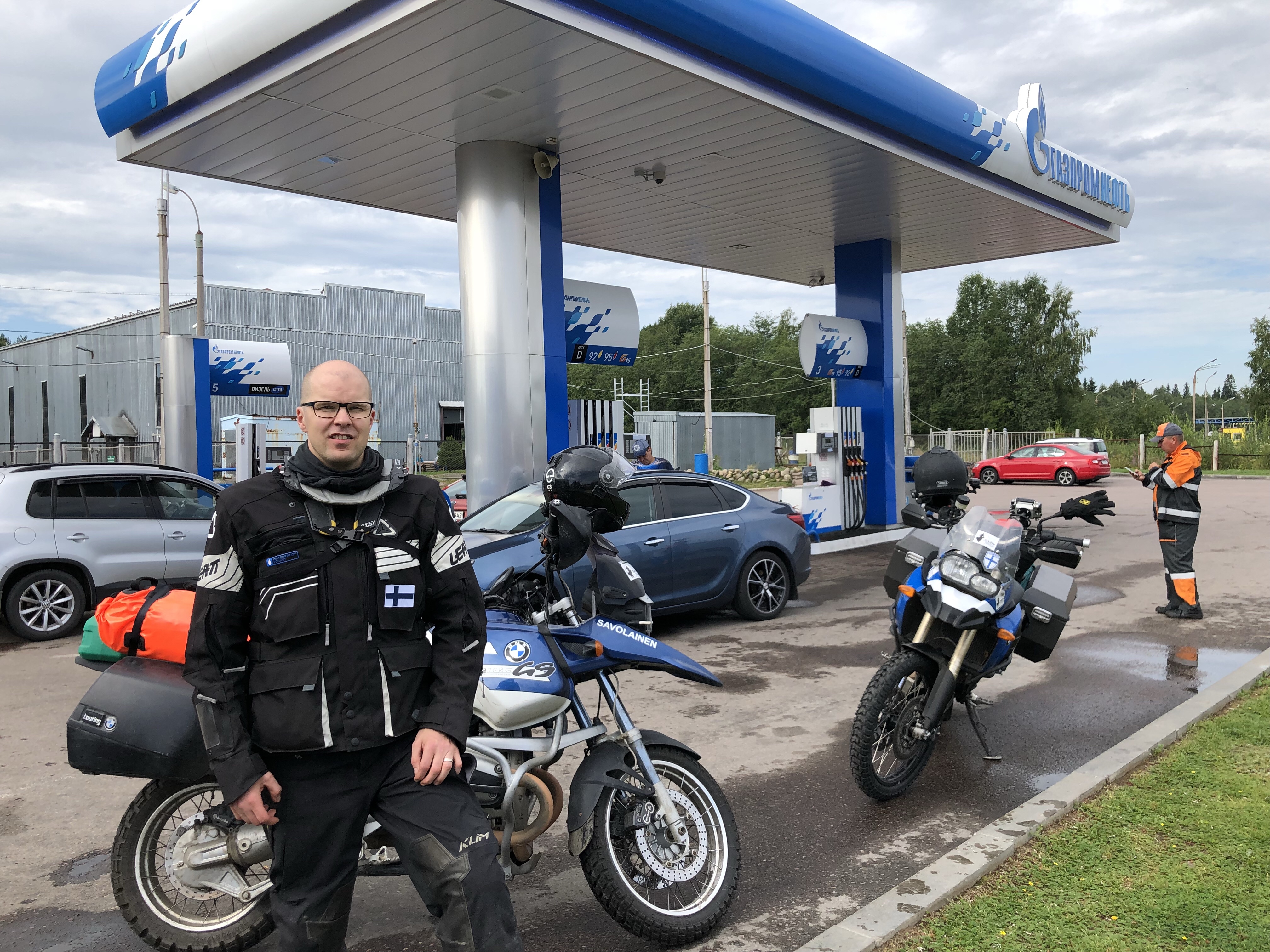 Right after the border the road was very good until it soon started to have roadwork signs, it said 29kms of roadworks. There were no construction etc. so we blasted on until there was a long queue of cars stopped due to construction. We rode in front of the queu and when chatting with the workers they told us they were doing explosions to remove rocks. This they told with translator app, naturally we did not have common language. They were amazed about the trip, we showed the route on map they probably thought we are grazy. Also, they were very interested about Samis bike, obviously water cooled motorcycles are not that common here.

After waiting some time we got through and the roadworks actually lasted for that 29kms, with some gravel parts in between and some other very short stops as well. No problems for the bikes, cars struggled sometimes with the gravel sections. 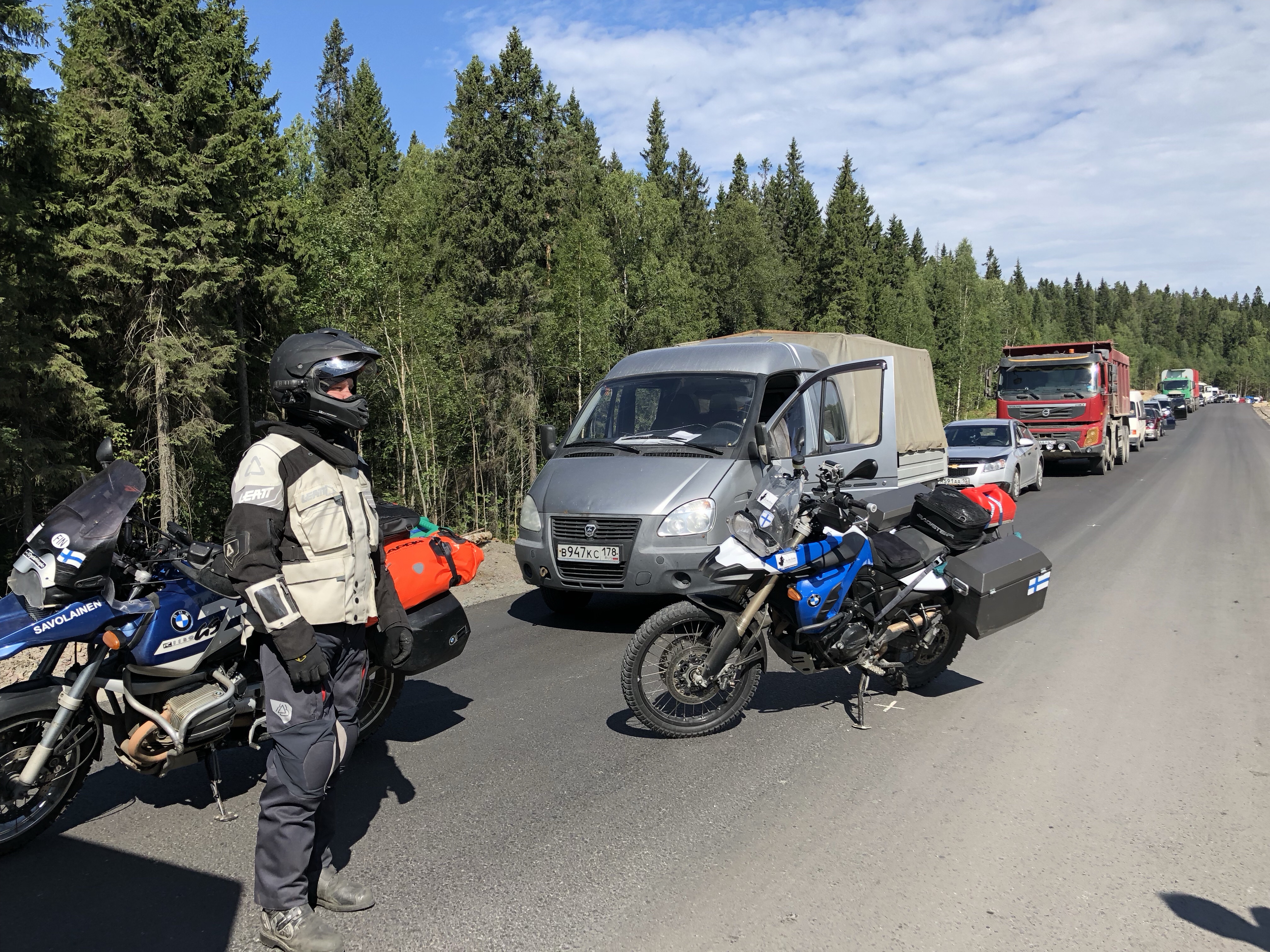 We stopped in Sortavala for great lunch in great restaurant by the lake Ladoga. They even had secure parking so we could leave the luggage on the bikes. The weather was getting hot and sunny. 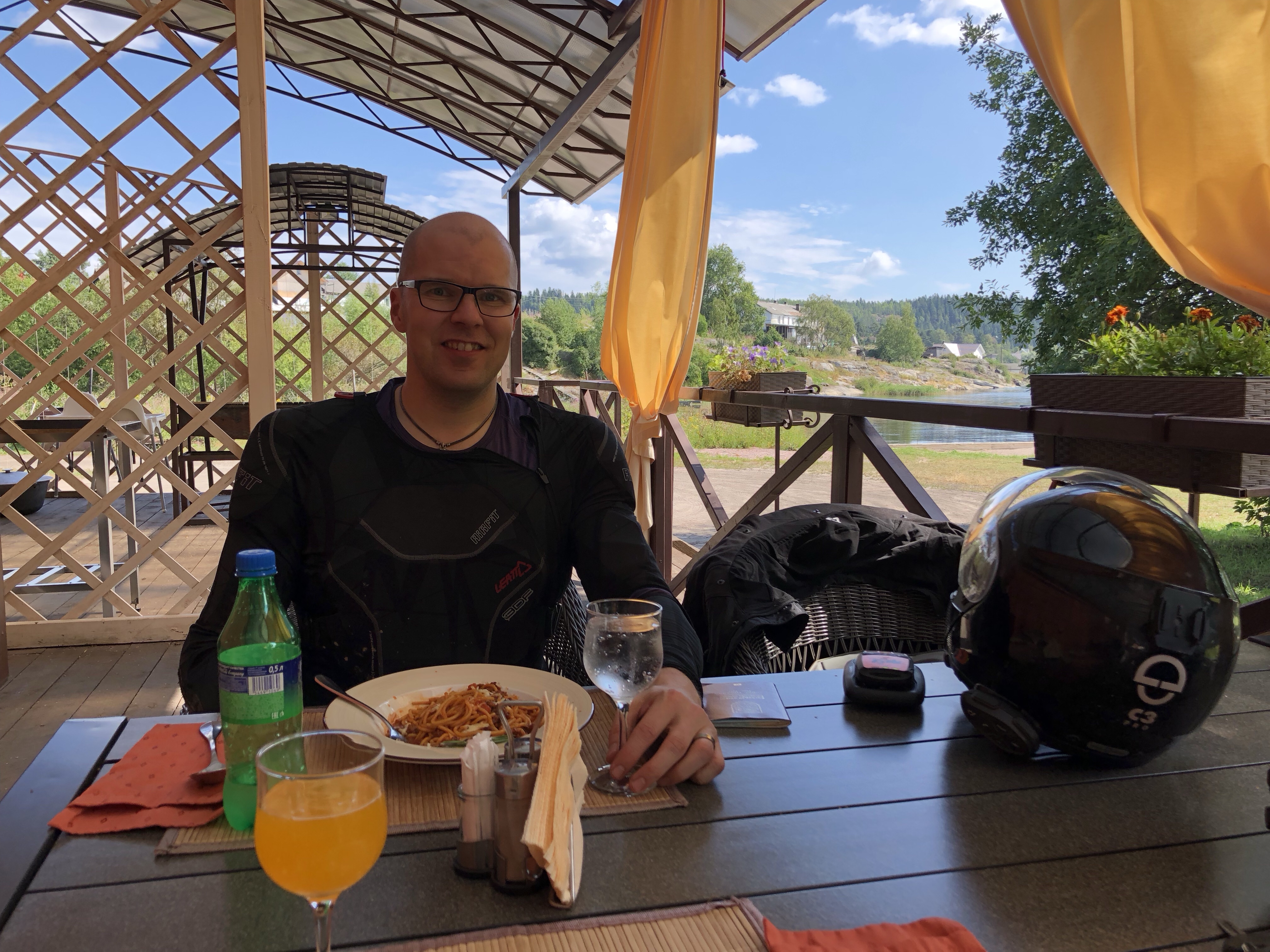 We also purchased the Russian SIM card from Sortavala and the took of towards Vytegra. The route took us through nice views to lake Ladoga and the road quality varied from perfect pavement to horrible mud sections. Sometimes it was like motorway, just gravel-top and dusty as hell, sometimes like motocross track. However, we enjoyed as we had the right kind of bikes for the varying conditions.

We continued with good pace and went through nice villages and mostly had almost empty roads. The last 80kms offered about 60kms of gravel/sand roads, before that it was mainly paved roads.

Everything went well and the bikes worked nicely. Even the fuel consumption seemed to have decreased, maybe do to the tune-up done to Mikas bike by Paavo at Cycle House Kuopio. The weather seemed not too good sometimes and even the road was wet at some places but we never met rain. Temps were between 23 and 29 degrees so it was quite hot. We made sure to drink enough water even though we did not stop many times.

This time the hotel was easy to find and it is actually quite nice. Even has secure parking and AC. They also have small spa but we skipped that. 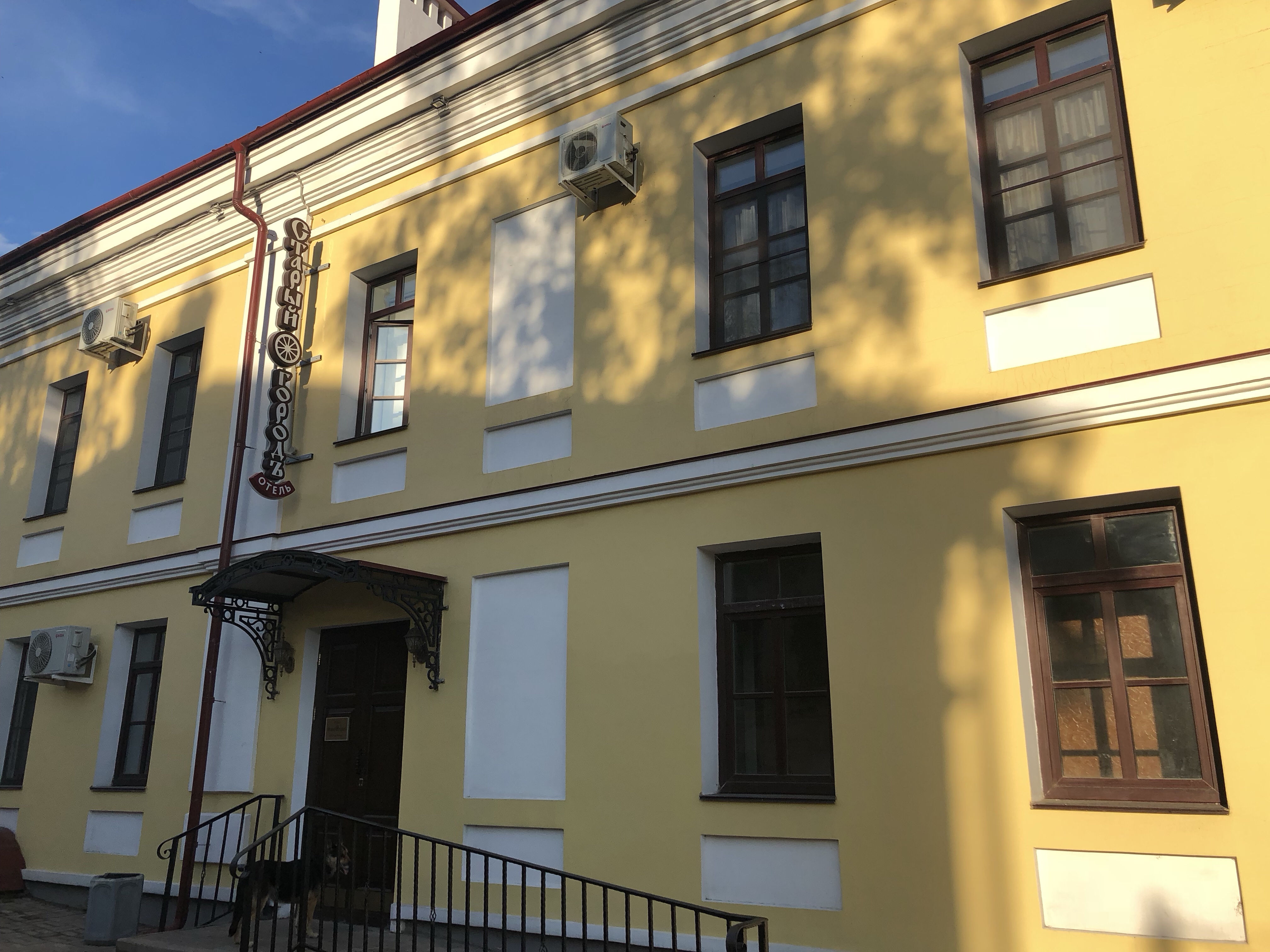 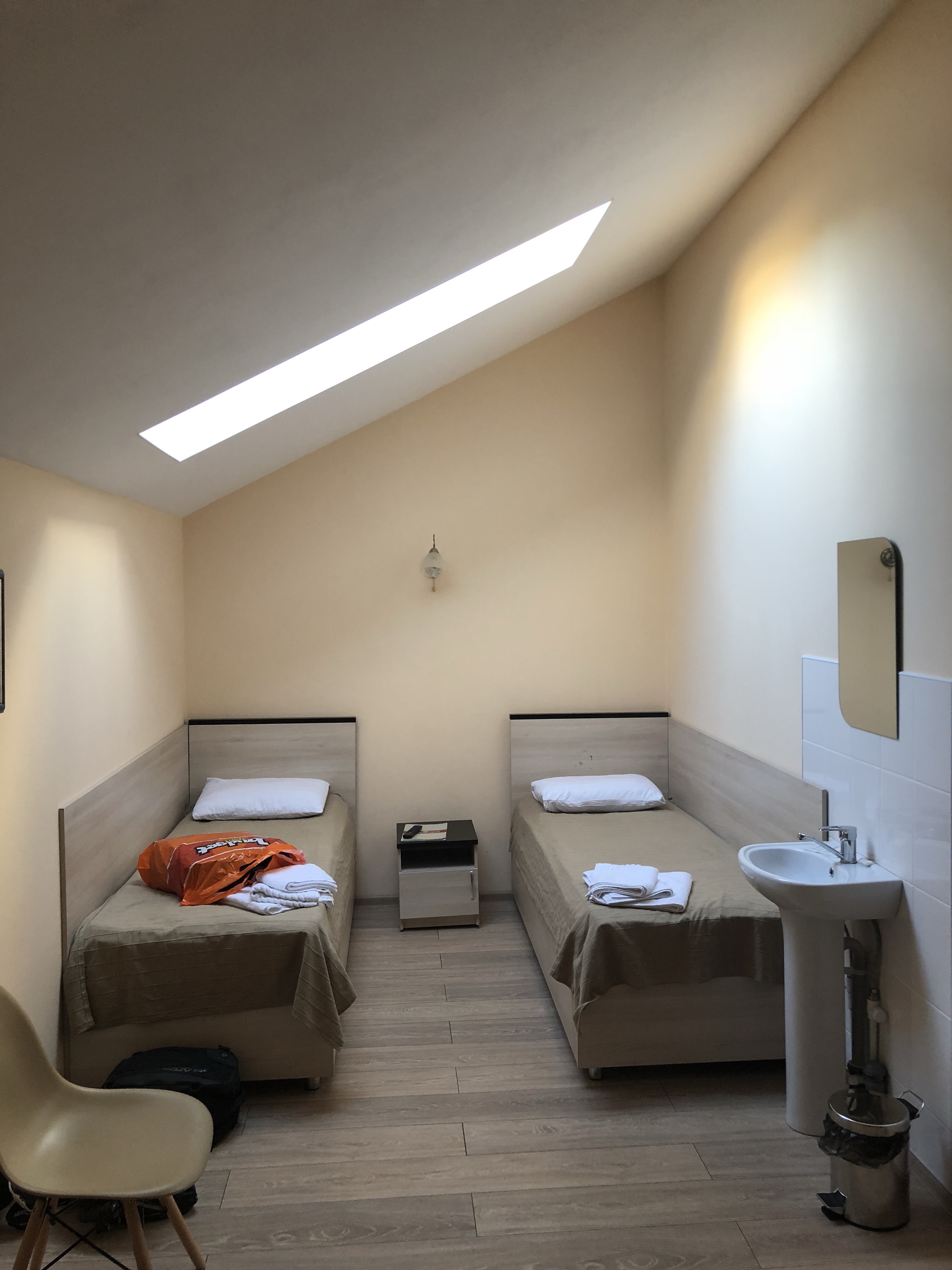 We arrived at about 7pm and soon went for dinner. We found a nice place by the river and had good meals even though did not really know what we ordered from the russian menu. 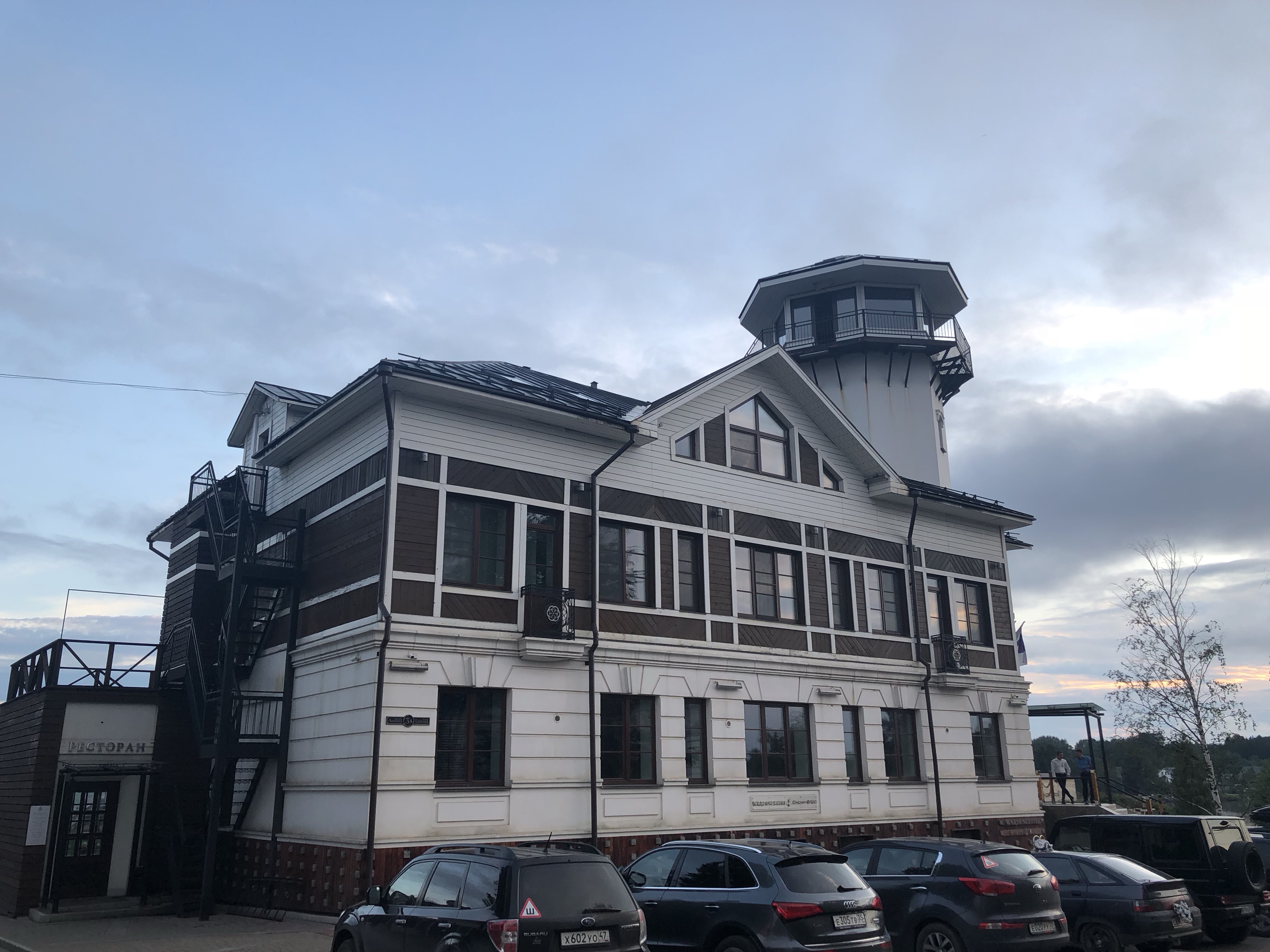 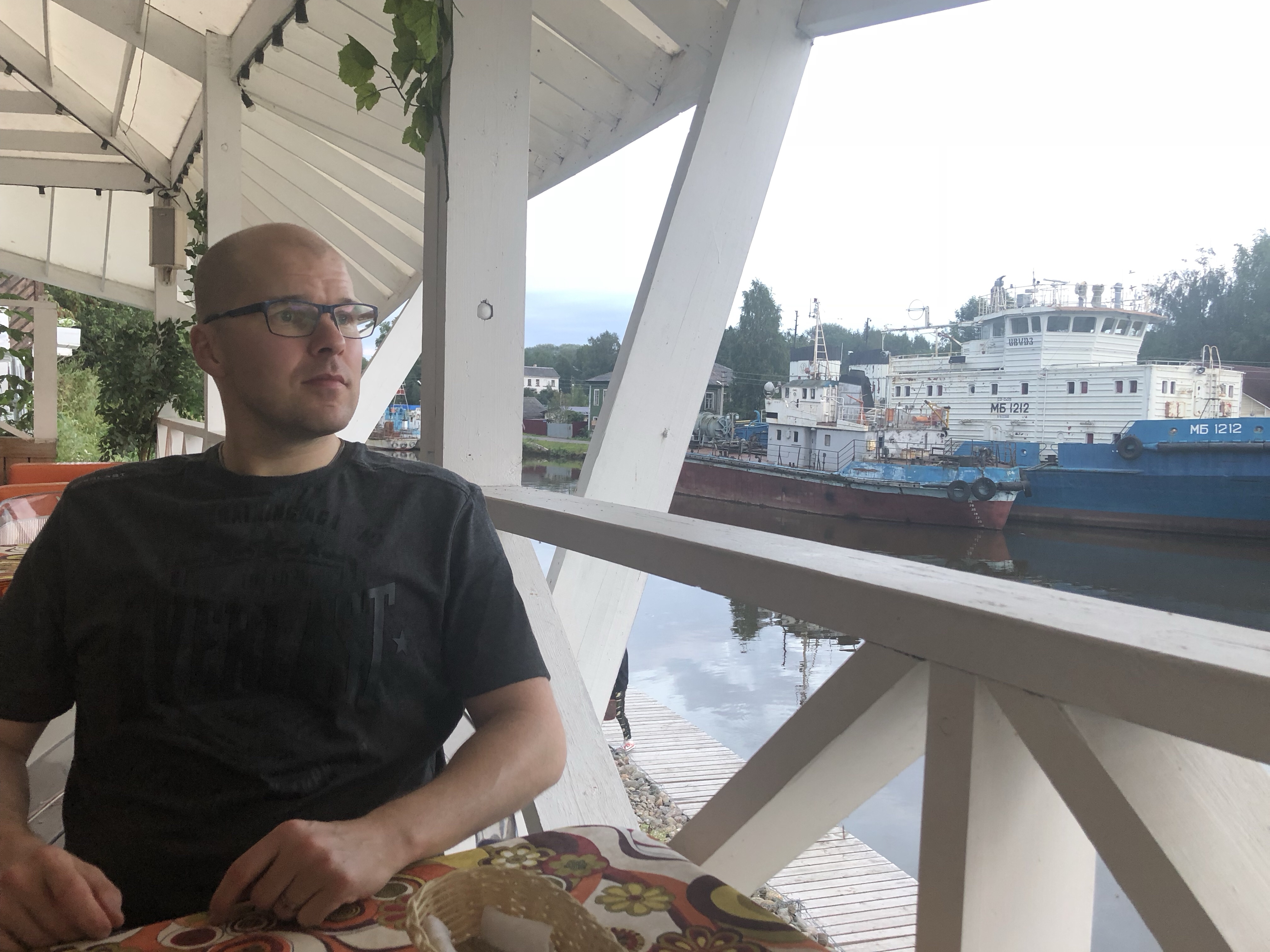 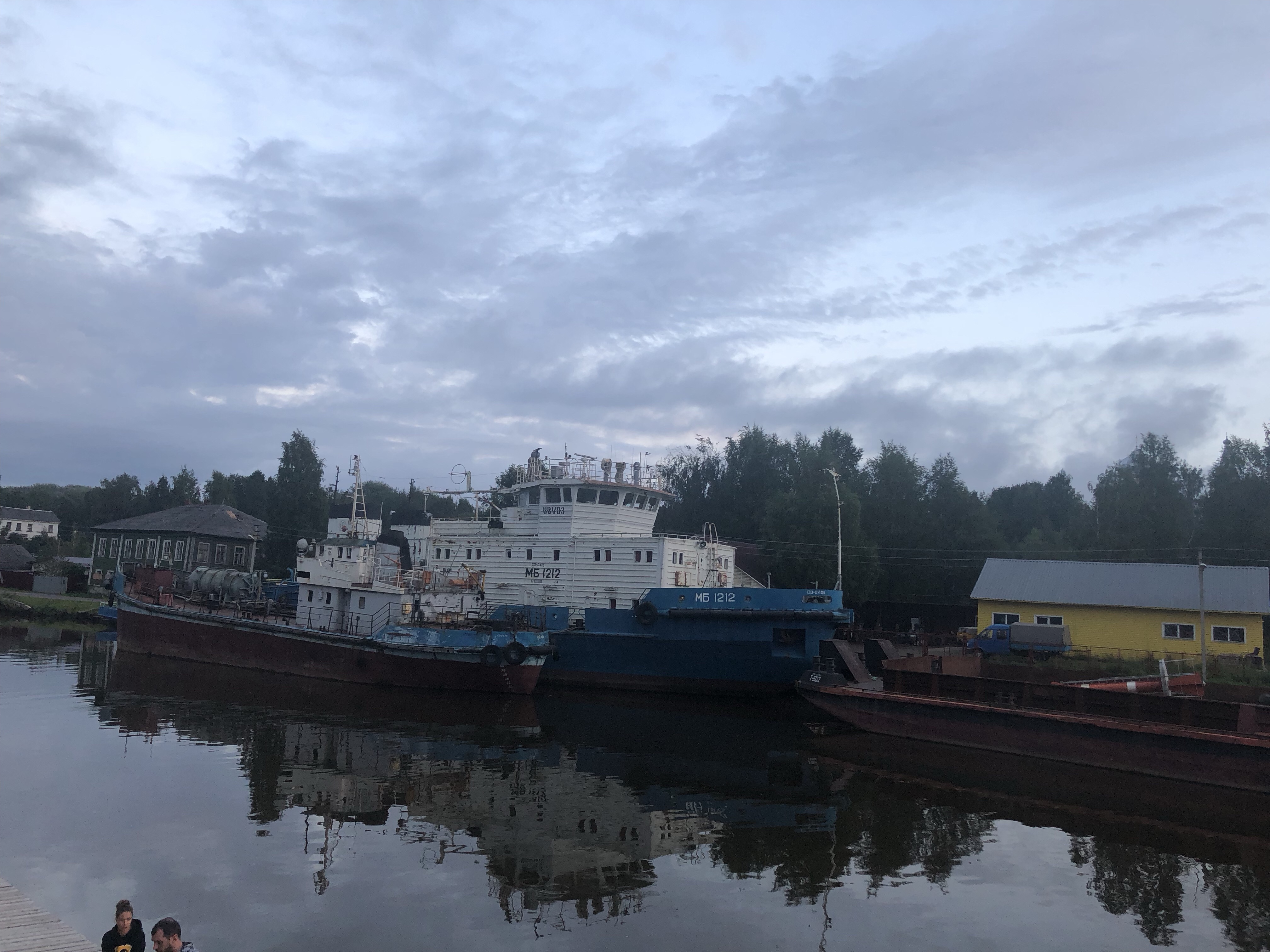 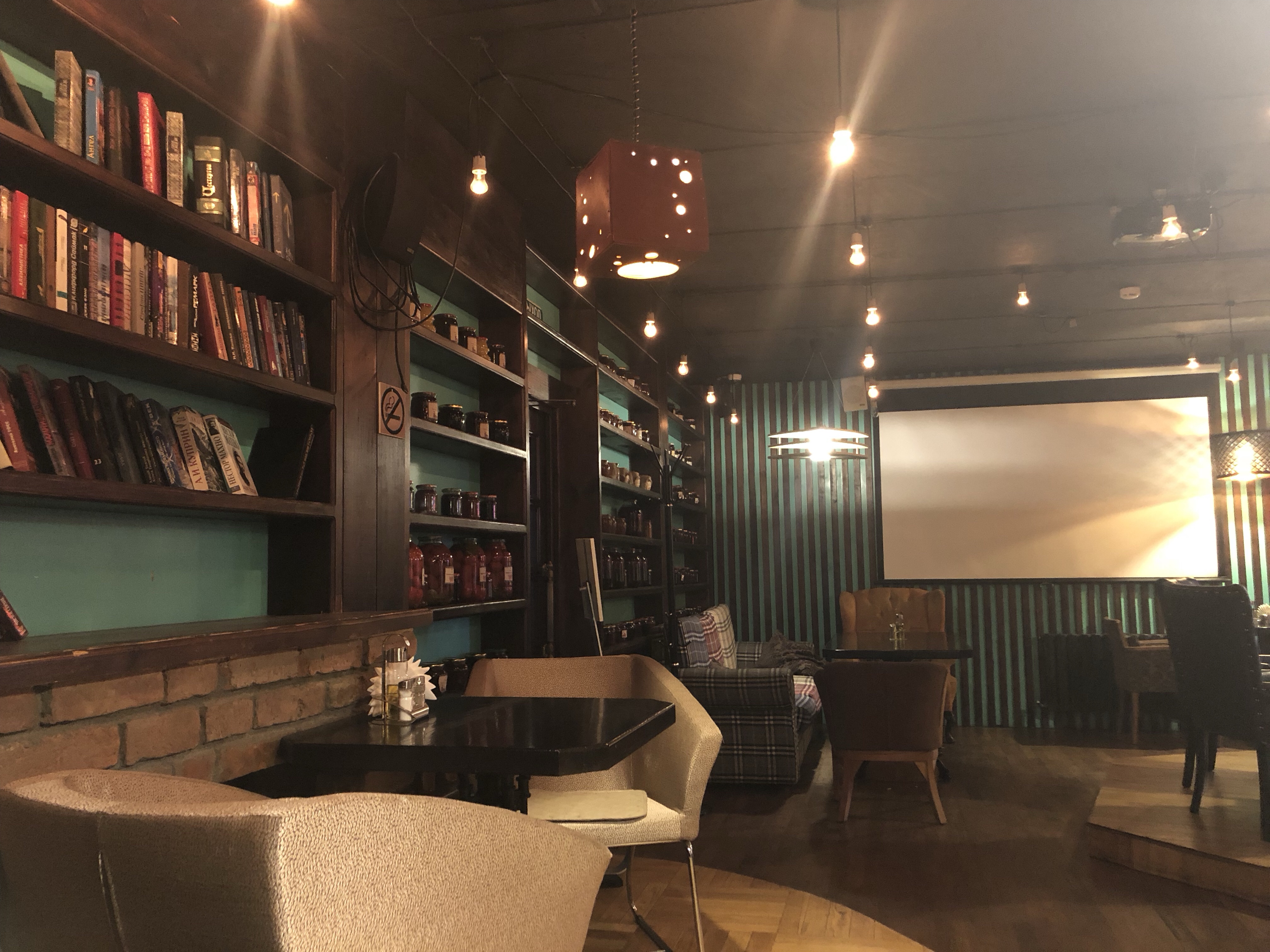 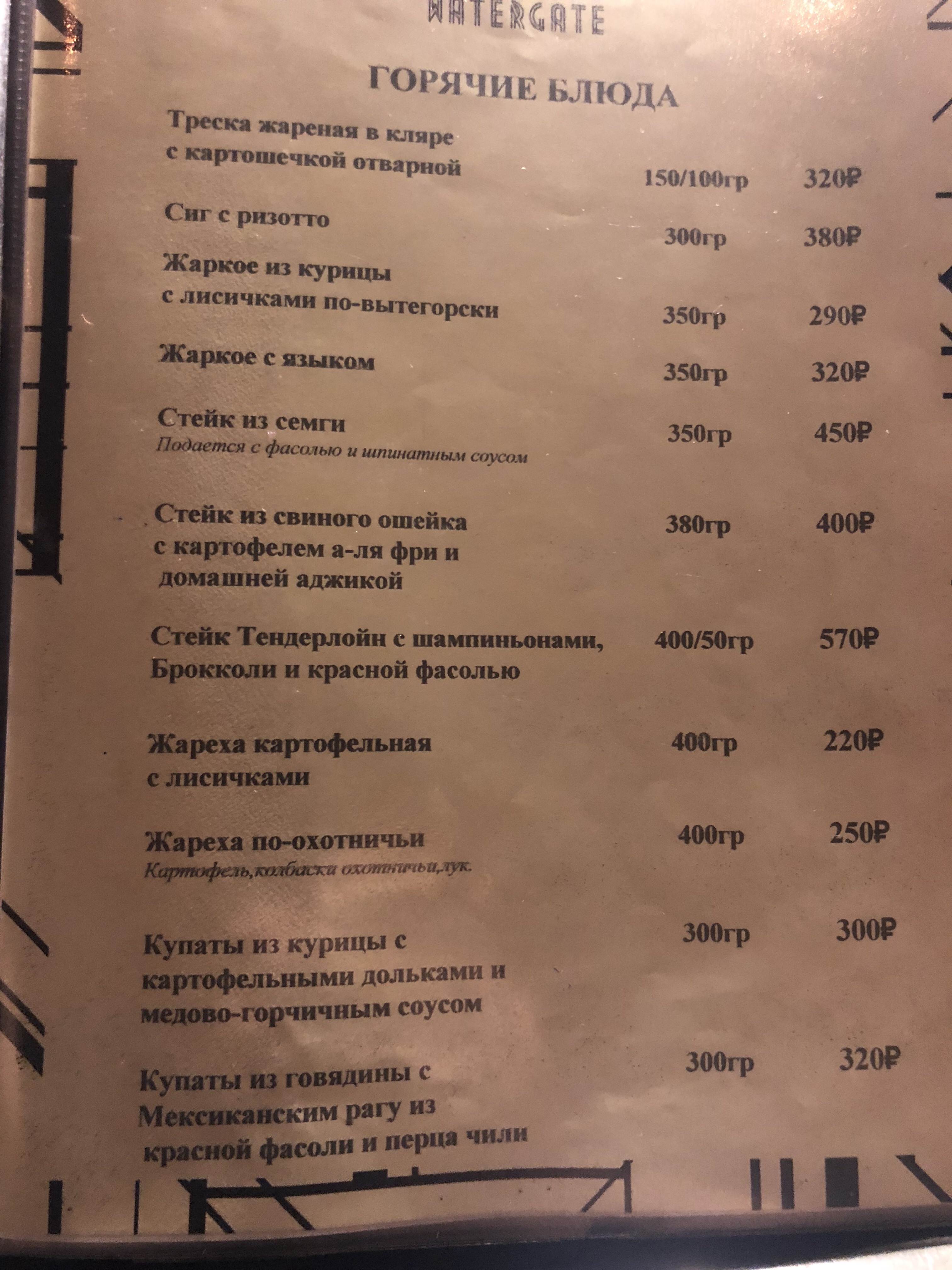 After the dinner we had a short walk in the town. It was very quiet for a friday night! We soon headed back to hotel to get good rest before next riding day. 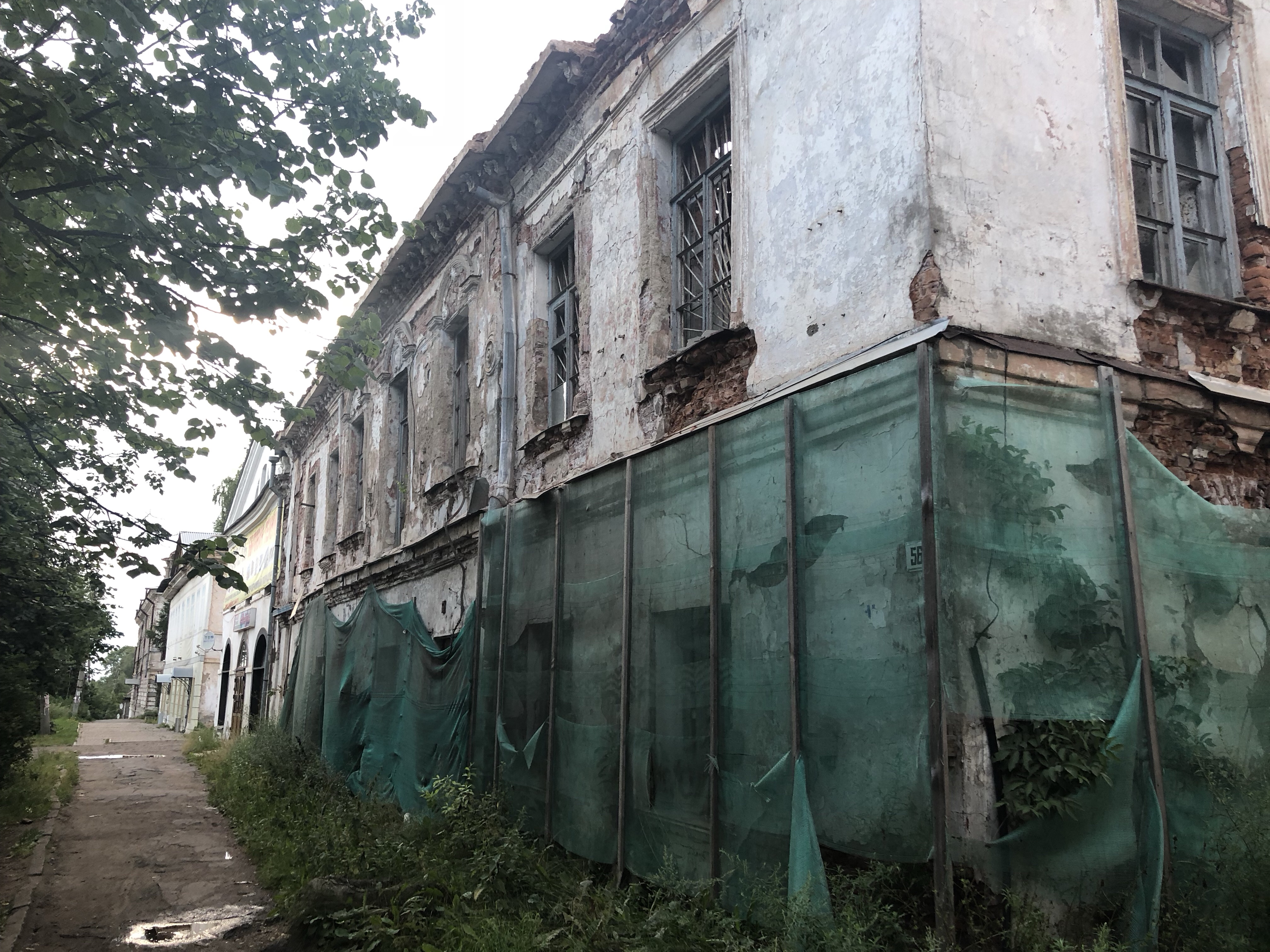 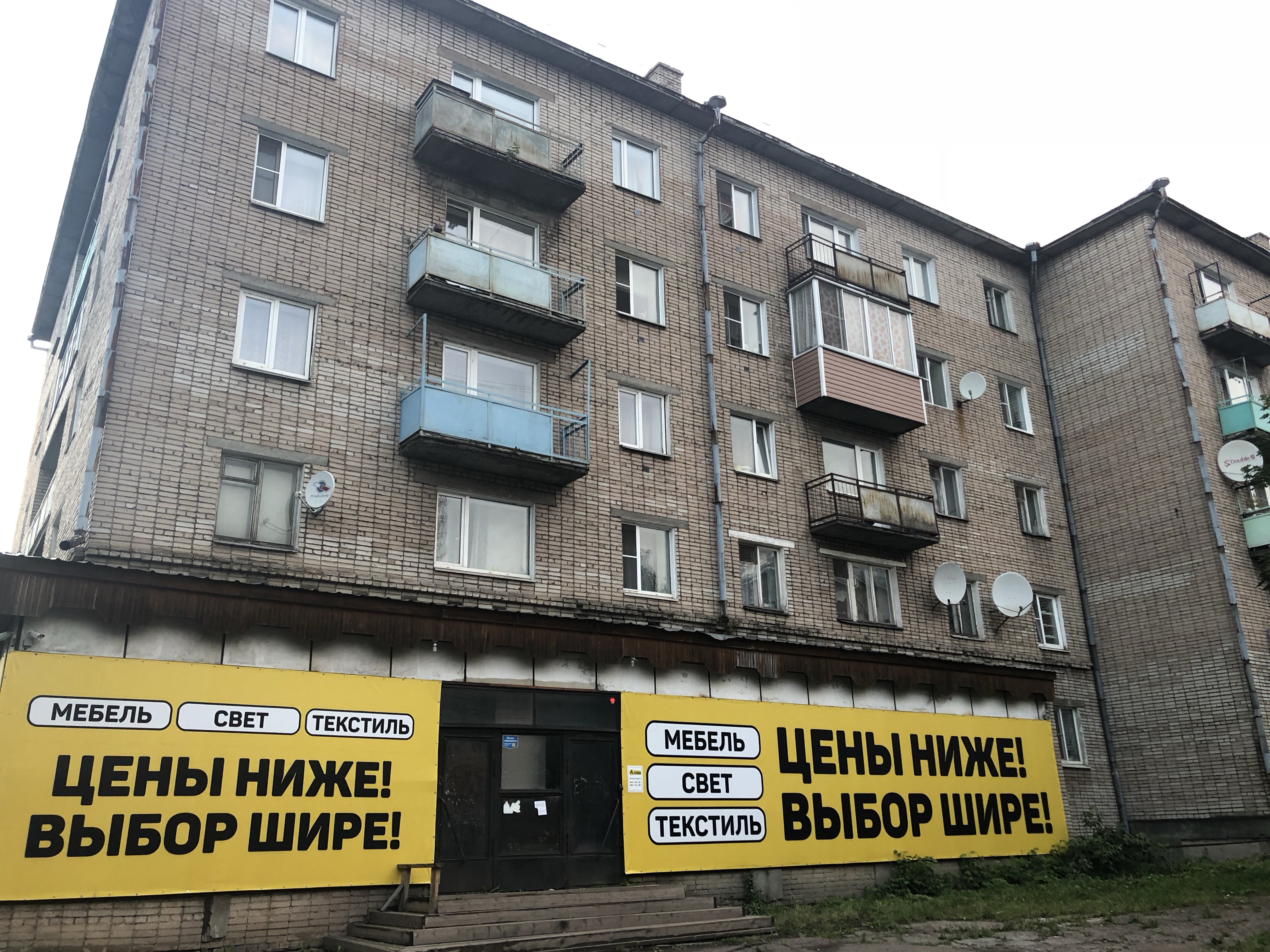 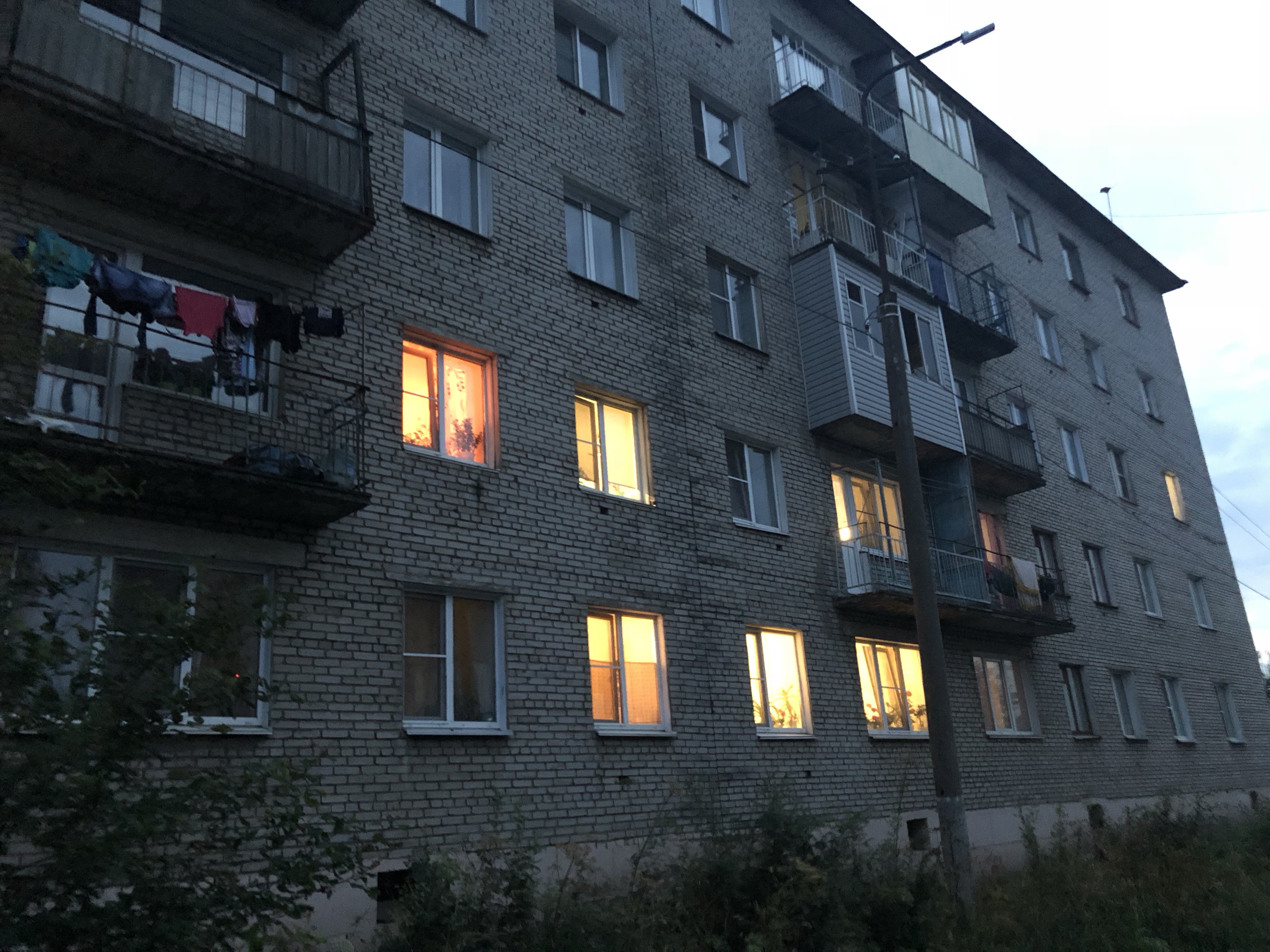 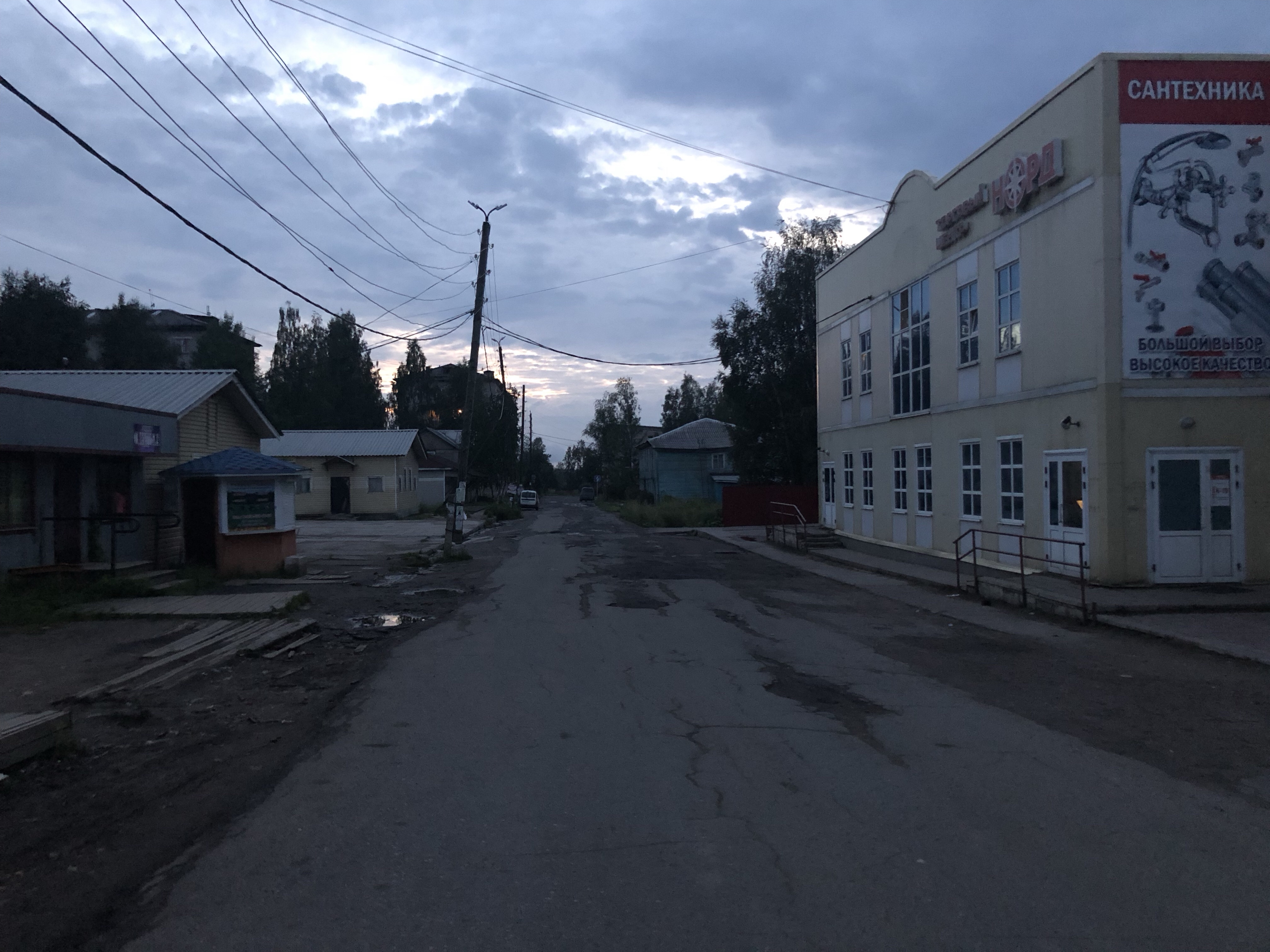 We really enjoyed the first riding day of the trip with great weather and good company. Lets carry on tomorrow!