Posted by savonsurauttelijat on elokuu 10, 2018 0 Comments

We woke up at about 7am and got Sergeys favourite breakfast, omelet and bread etc. It was very tasty and we got our stomachs full. We finalized packing the luggage and loaded the bikes. With farewells to Evgenia we took off together with Sergei who guided us through the morning traffic to the city border where it was time to say goodbye to him as well. Great people, both of them!

We refueled after about 30kms and bought some water. Then it was transit mode on the fast roads. Soon the nature started to become more hilly (is that a word), until here it had been quite flat in general. Soon we had to fill up again and we also enjoyed ice-creams in a place with nice view to the hlls. 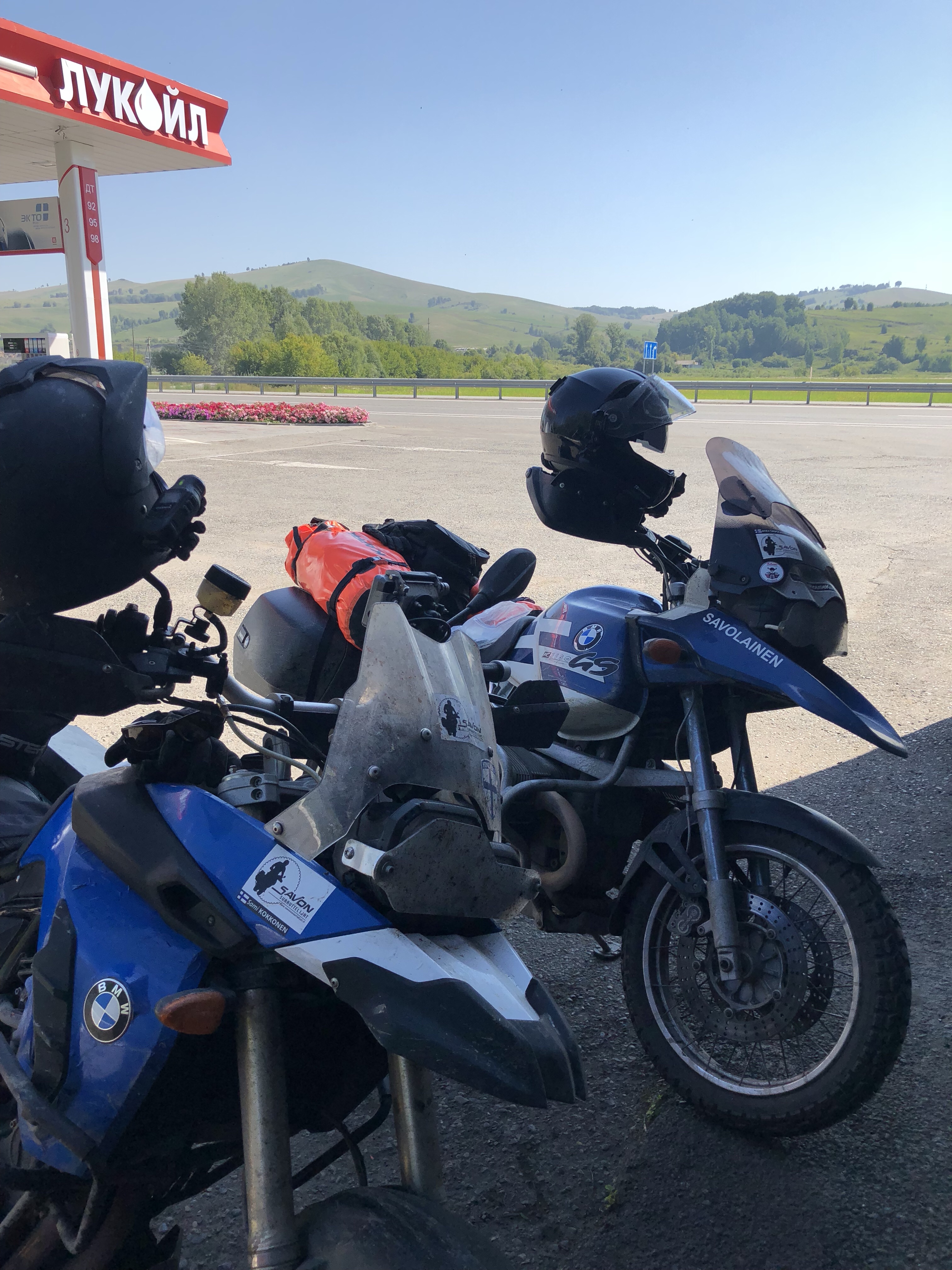 Soon after hitting the road again, we reached 2 bikes 2-up both. We stopped them and they were two russian couples from St. Petersburg on their way to Altai. We had good discussions about bikes and travelling for about 45mins. We also shared contact details since you never know when help is needed and we were heading to the same direction for now. 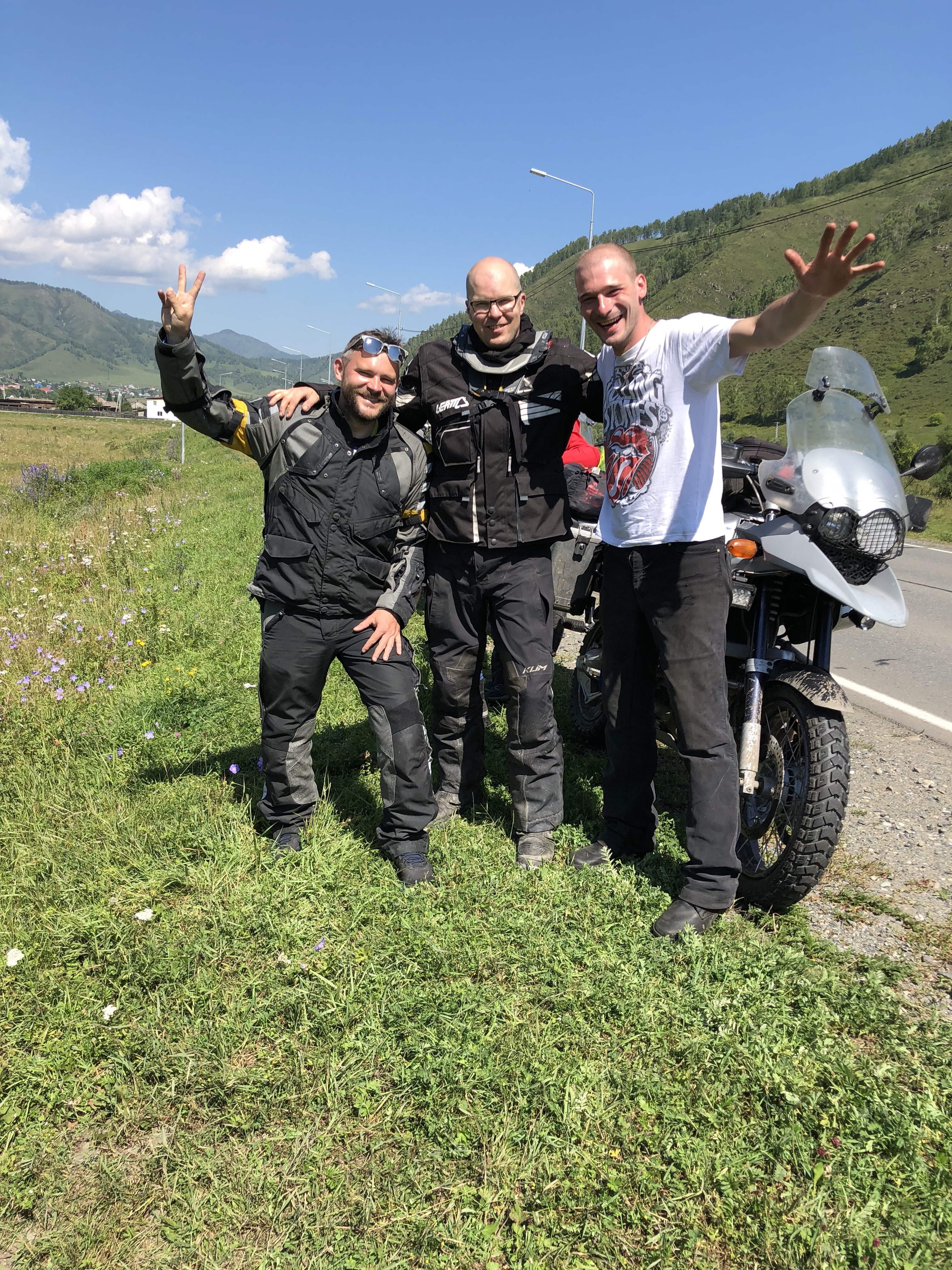 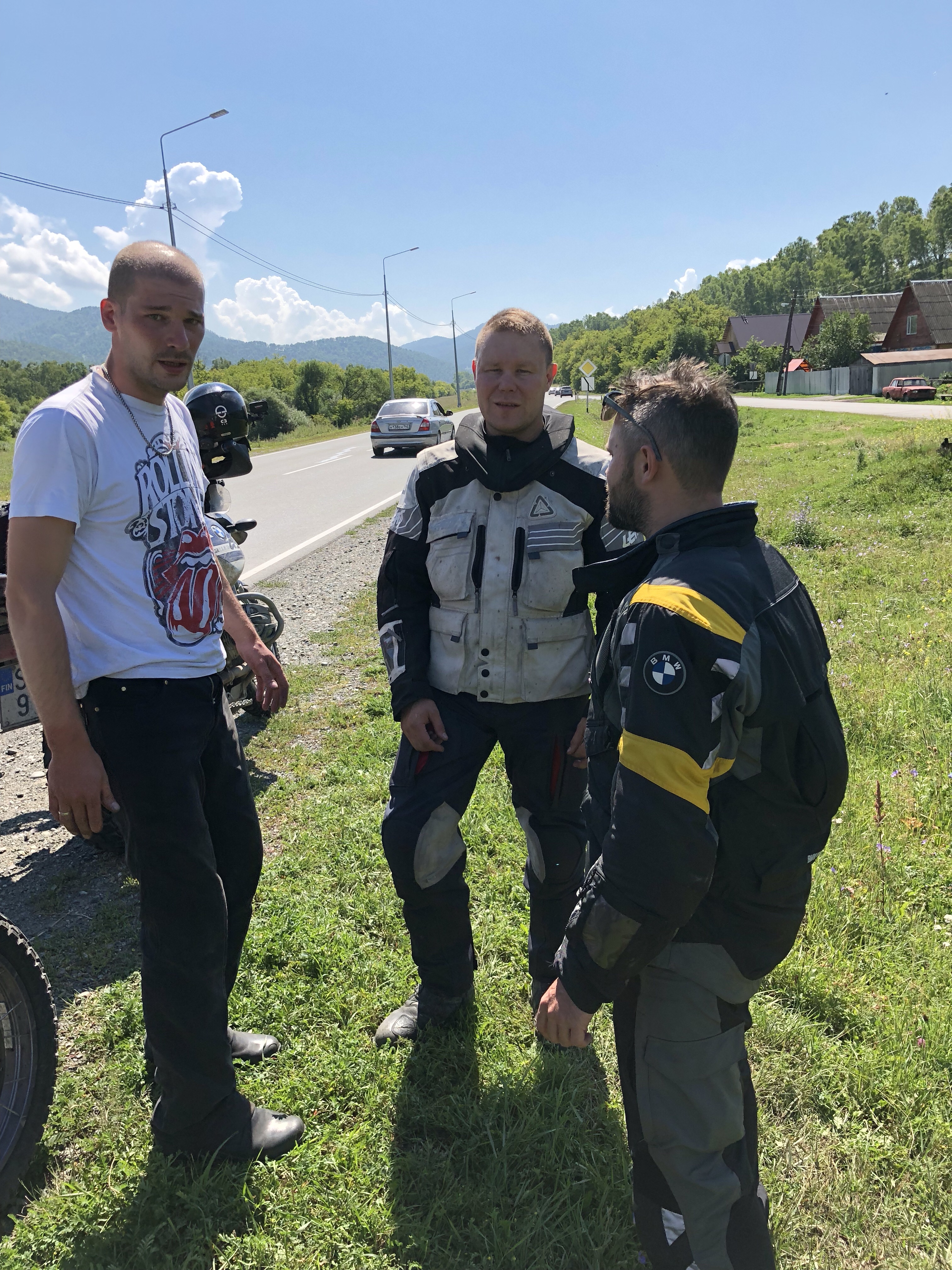 The weather was hot and we moved on to find a place for lunch. We had planned to prepare the lunch in the nature, and found a great place by the river and with view to hills. It was very nice to cool ourselves with the river water. Meal was good and well needed, it was soon 2 pm. 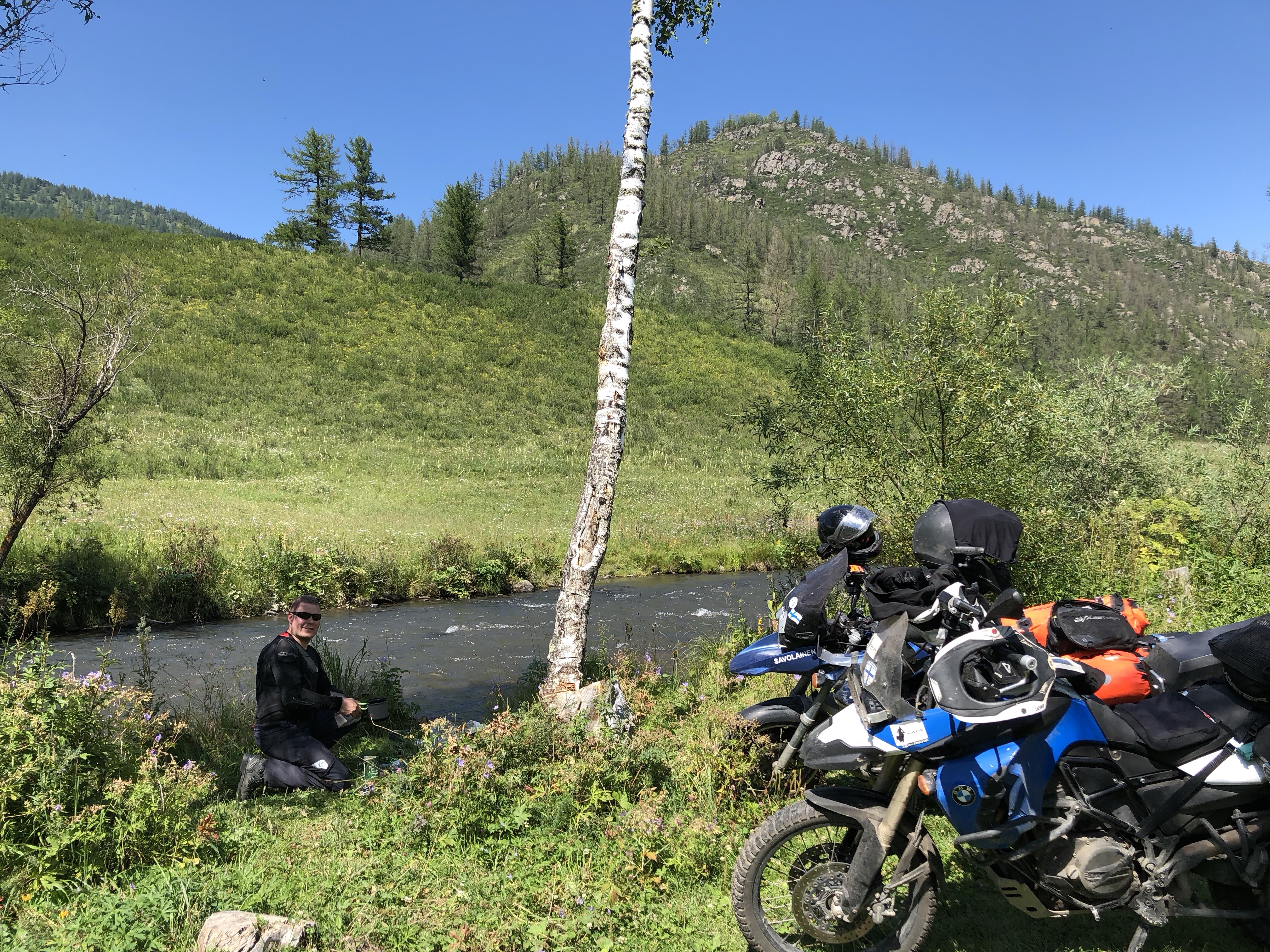 When we tried to continue, somehow roadwork had just started on the main road and we had to wait for a while, in the very hot weather that was not too nice. Soon after continuing, Samis bike started acting again, with the same symptomps as earlier. We decided to continue till next gas station even though it was annoying to ride a bike that suddenly just dies every now and then. Luckily this ”dying” only lasts for a couple of seconds and then the bike runs again for a while.

At hte gas station we tried to think what caused the problem and checked the sidestand switch that could potentially cause similar problems due to vibrations. That seemed to be ok. We also though it could be bad bensin since earlier the problem had disappeared when refueling. While checking the bikes, other travellers on bikes arrived. It was 2 polish guys that we had passed couple of times during the day, and an italiand gentleman. We briefly discussed with them about the problem and about travel plans. The Poles, Majiek and Majiek are going to Mongolia on their 15 thousand kilometer trip and the Italian, Claudio, was also true traveller on a trip of similar length. We took photos, shared contacts and then they took off. Also, there was this sweetest little girl who sat on the bike and had her photo taken. She also got Savonsurauttelijat sticker and some finnish candies.

At that gas station we noticed that most of the people started to look different from the russians in the areas we had passed so far. It was somekind of mongolian look. It is so nice to see how looks can vary but people are the same. Soon also we took off since we did not any proper ideas about what to do with the bike and earlier just having a break had fixed it for a while. 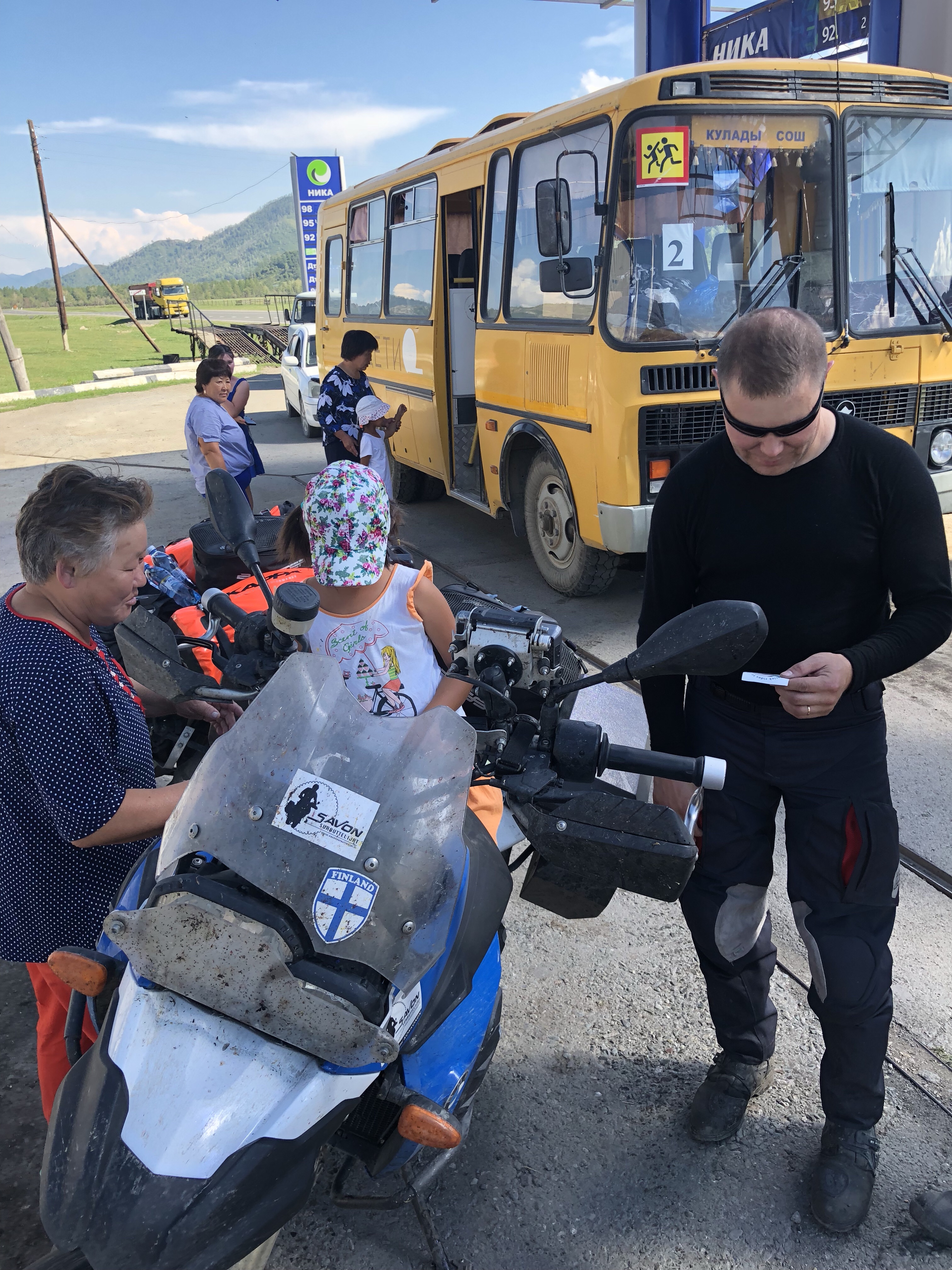 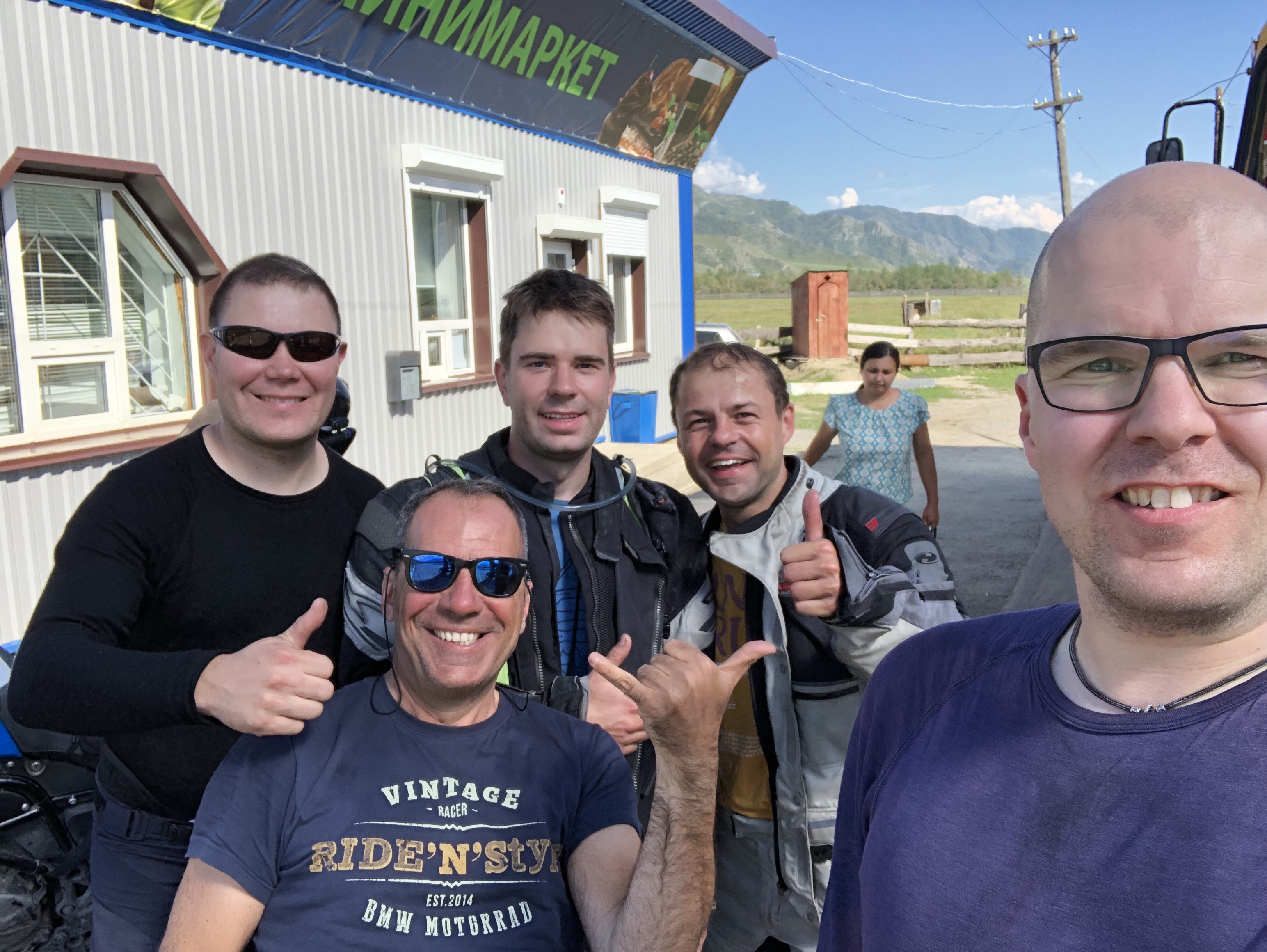 The bike worked well and now the views became spectacular! Roads were excellent, except when we took detours to some places we had put on our route based on recommendations from travellers who had visited these places. Katyn suspension bridge was (long?) gone but offered us nice gravel descent (and ascent on the way back) and nice view. Here was also lots of cows and horses running free, a common sight from here on in the whole Altai area.

We posed with the bikes in couple of awesome places in the end of small ”road” or path with nothing but emptyness (huge drop) on the other side. It was very hot and soon the bike started acting again, which was not very nice on this small road…luckily we made it out safely and continued towards Aktash. 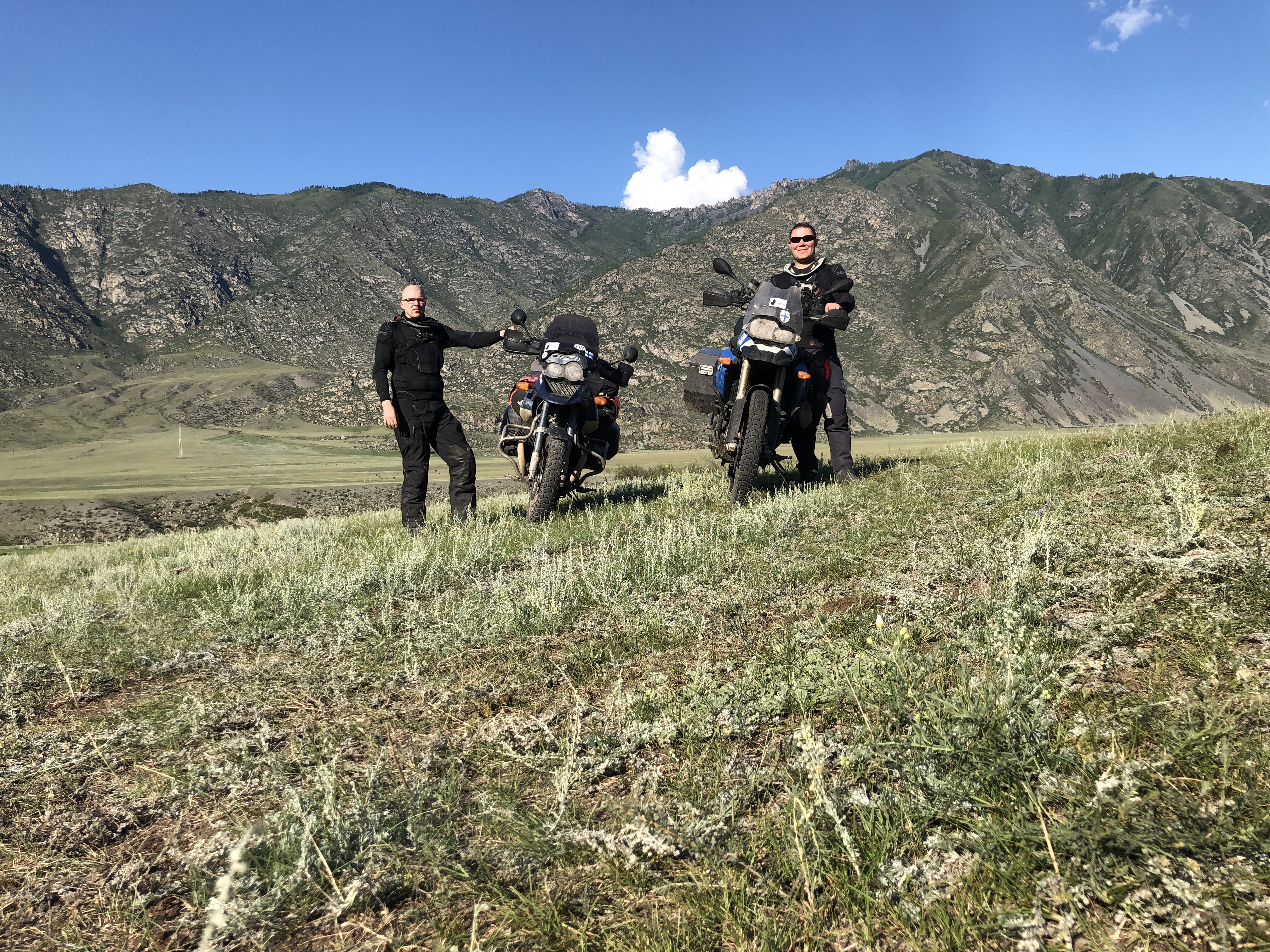 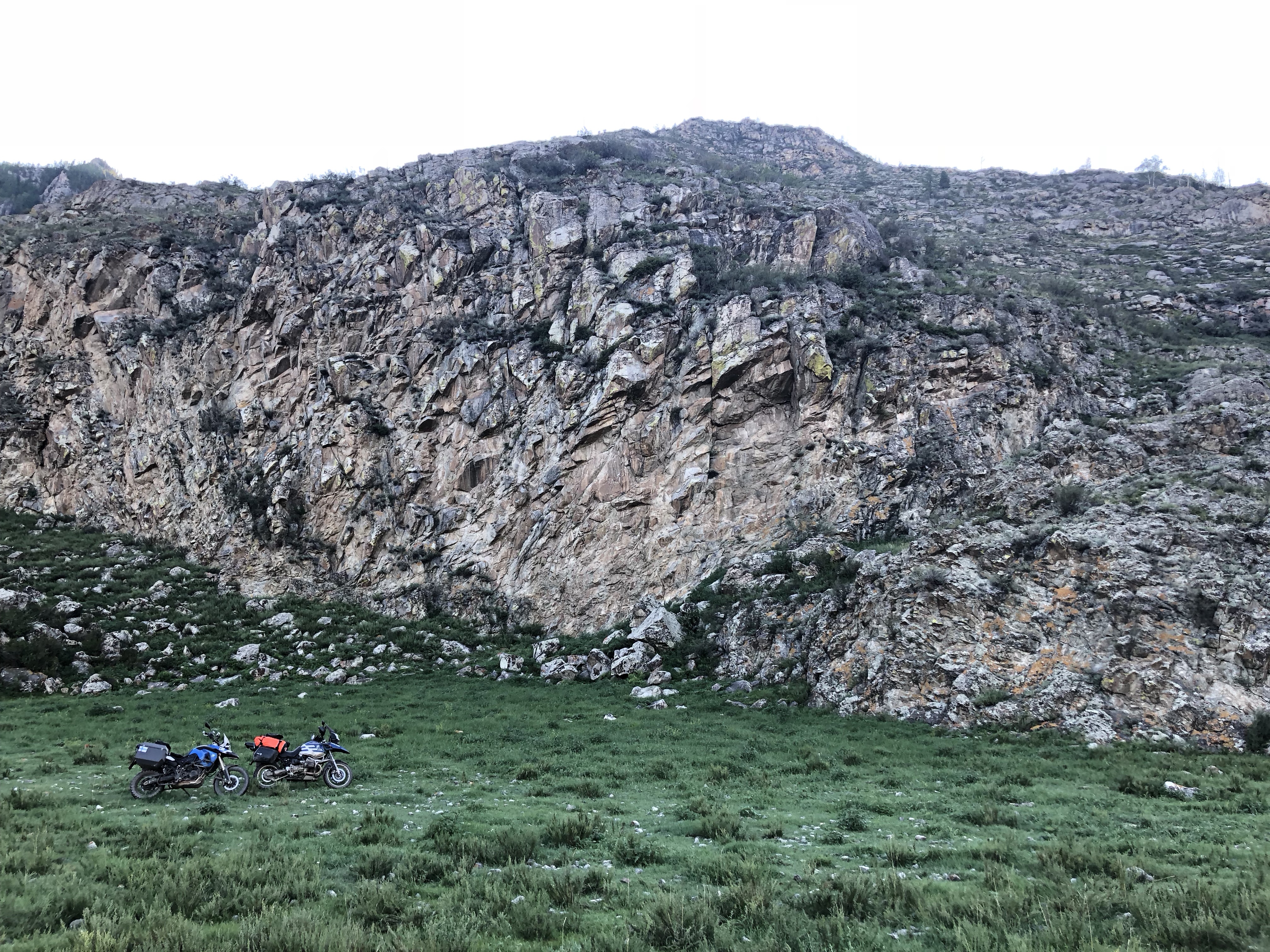 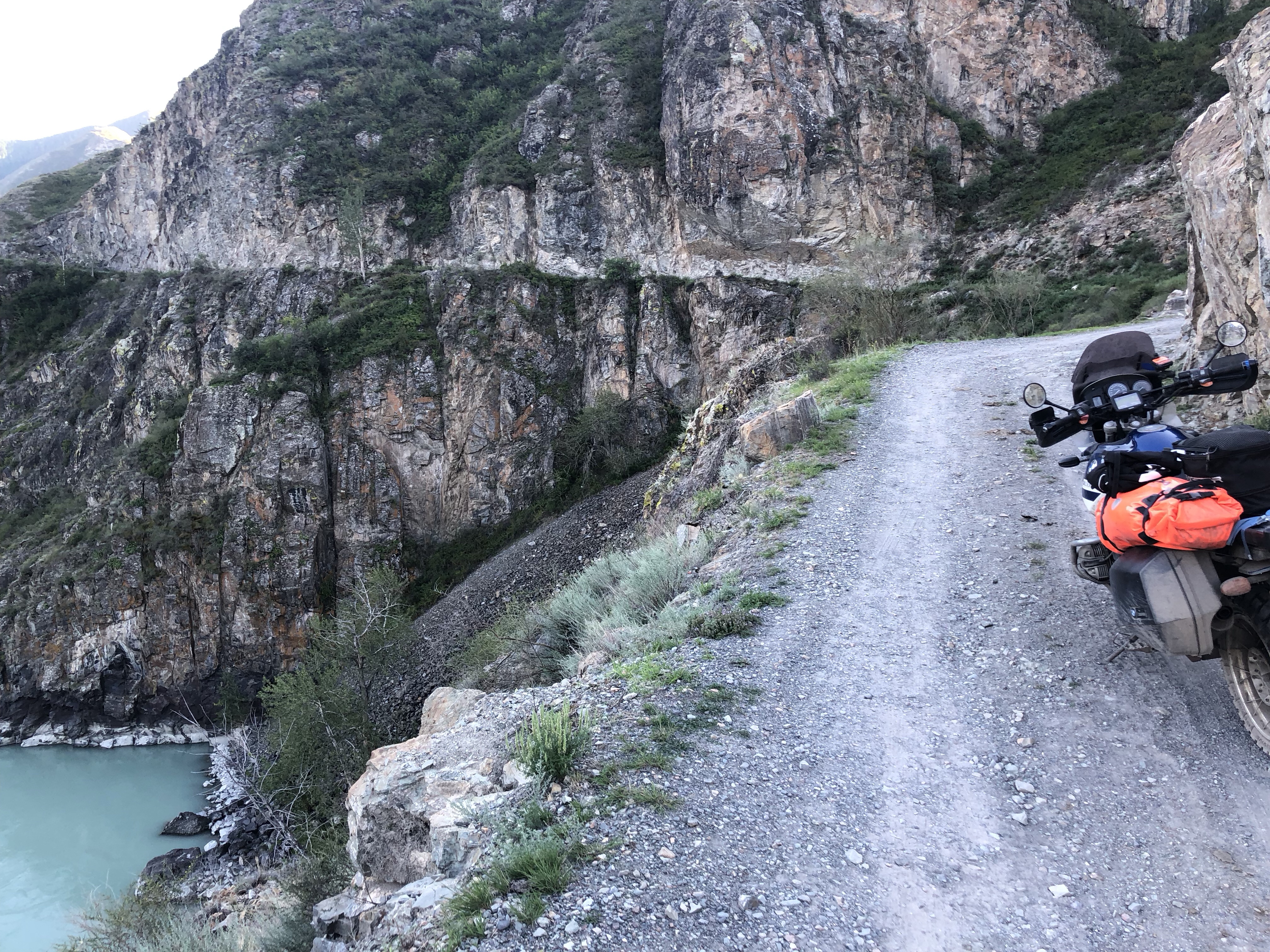 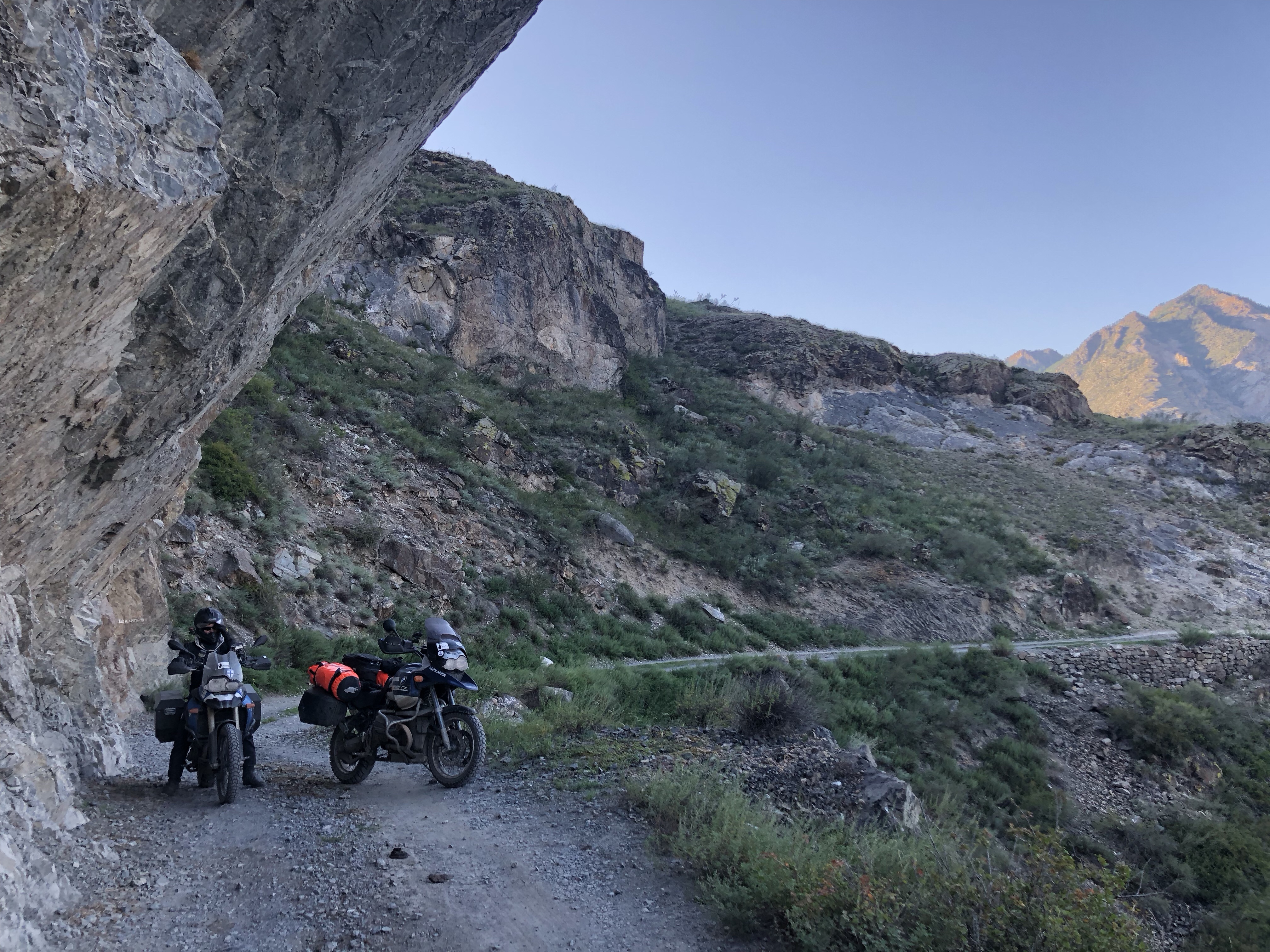 The accommodation we had booked on a hostel, decent place but nothing fancy. Even the shower was pay per use… It did not cost much and having temps over 30 the whole day, we probably would have paid anything for a shower. 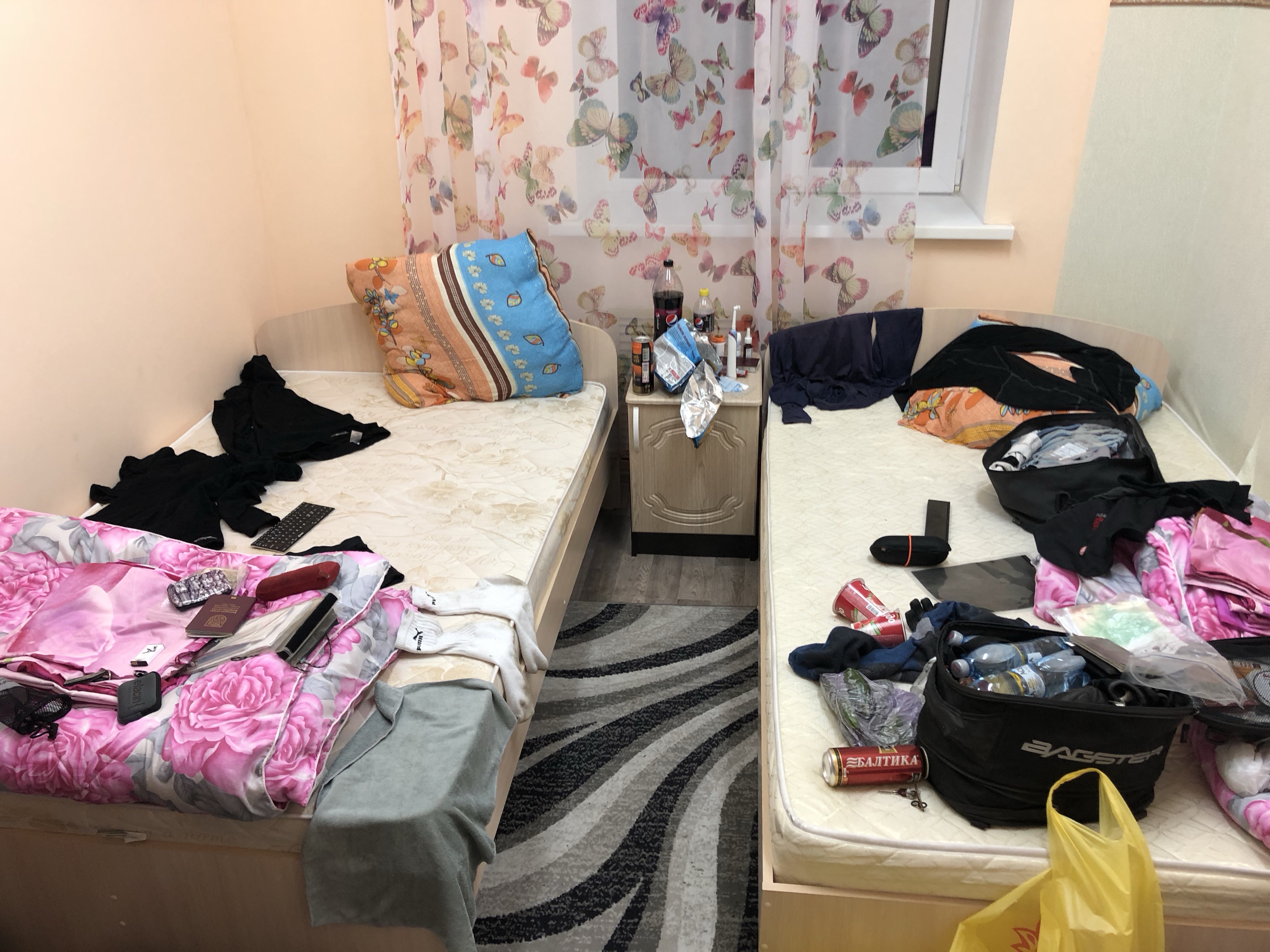 We got directions to a cafe close by and to a crocery store (magazin, as they are called in Russia). We bought some snacks and soda from the store before it closes and then hoped to get some food from cafe. No such place was found until we entered building with sign Food shop outside, consisting of almost empty room having just a desk where you can place orders, take away type. We got help from a nice guy from Novosibirsk and managed to order pizzas. As it would take 45mins to prepare them and the place was closing, they proposed to deliver the pizzas to our room at the hostel. Great service from them! No way that would happen in Finland, they would just let you without food if they were closing… 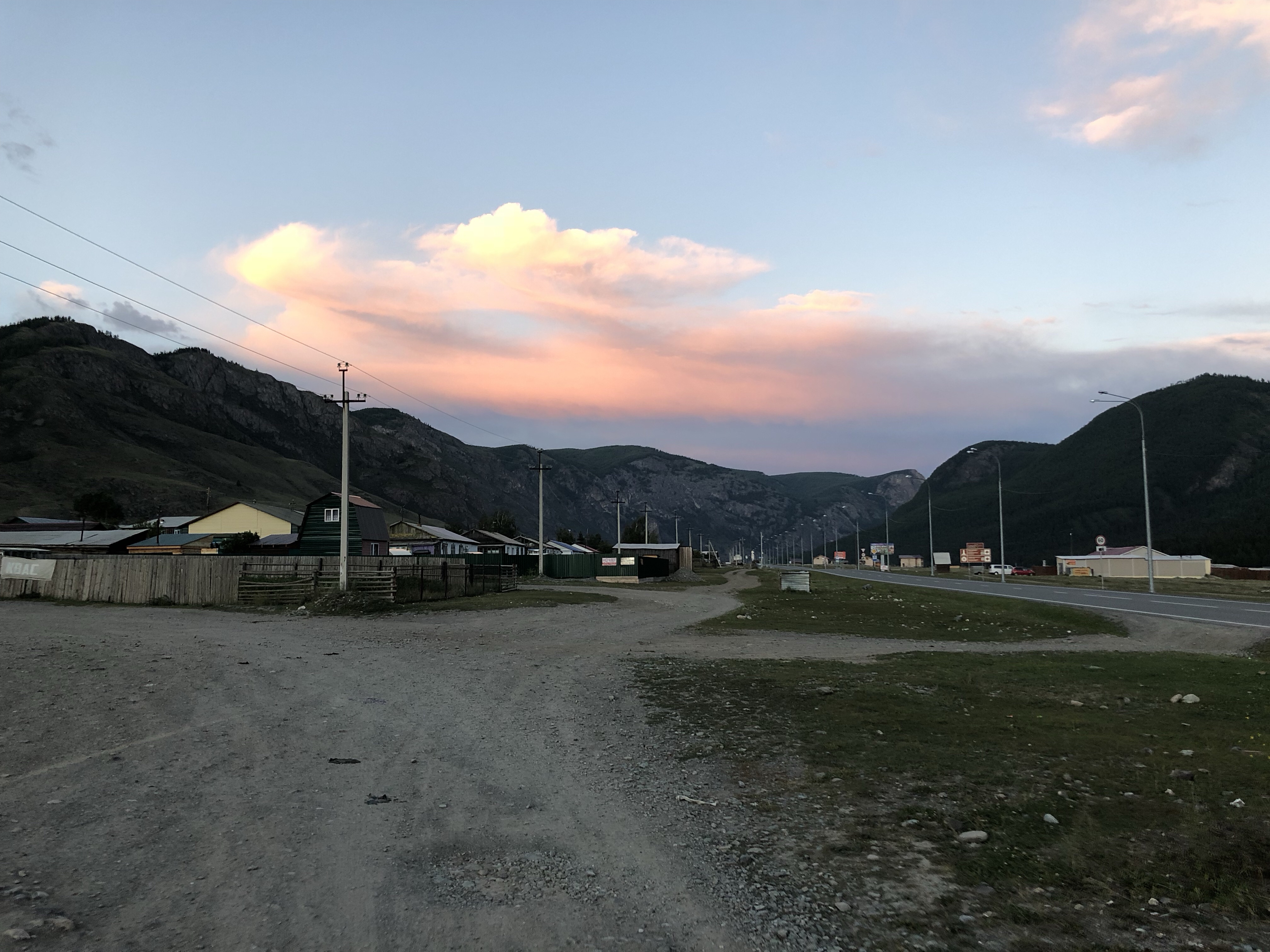 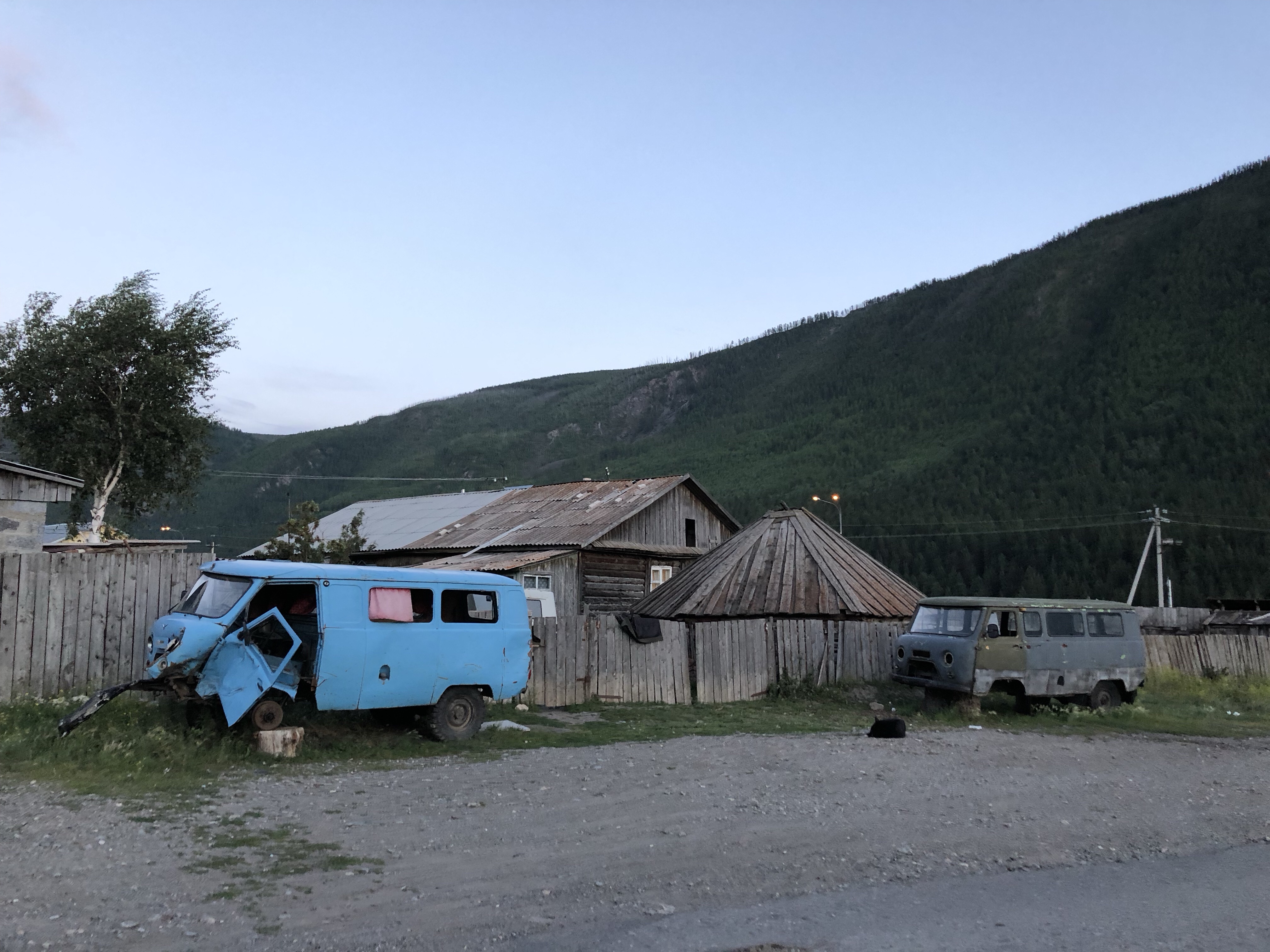 After a bit over an hour the door was knocked and the pizzas arrived. Other than eating we just spent the evening writing blog. Internet connection was bad or missing the whole time so we could not upload pictures properly. 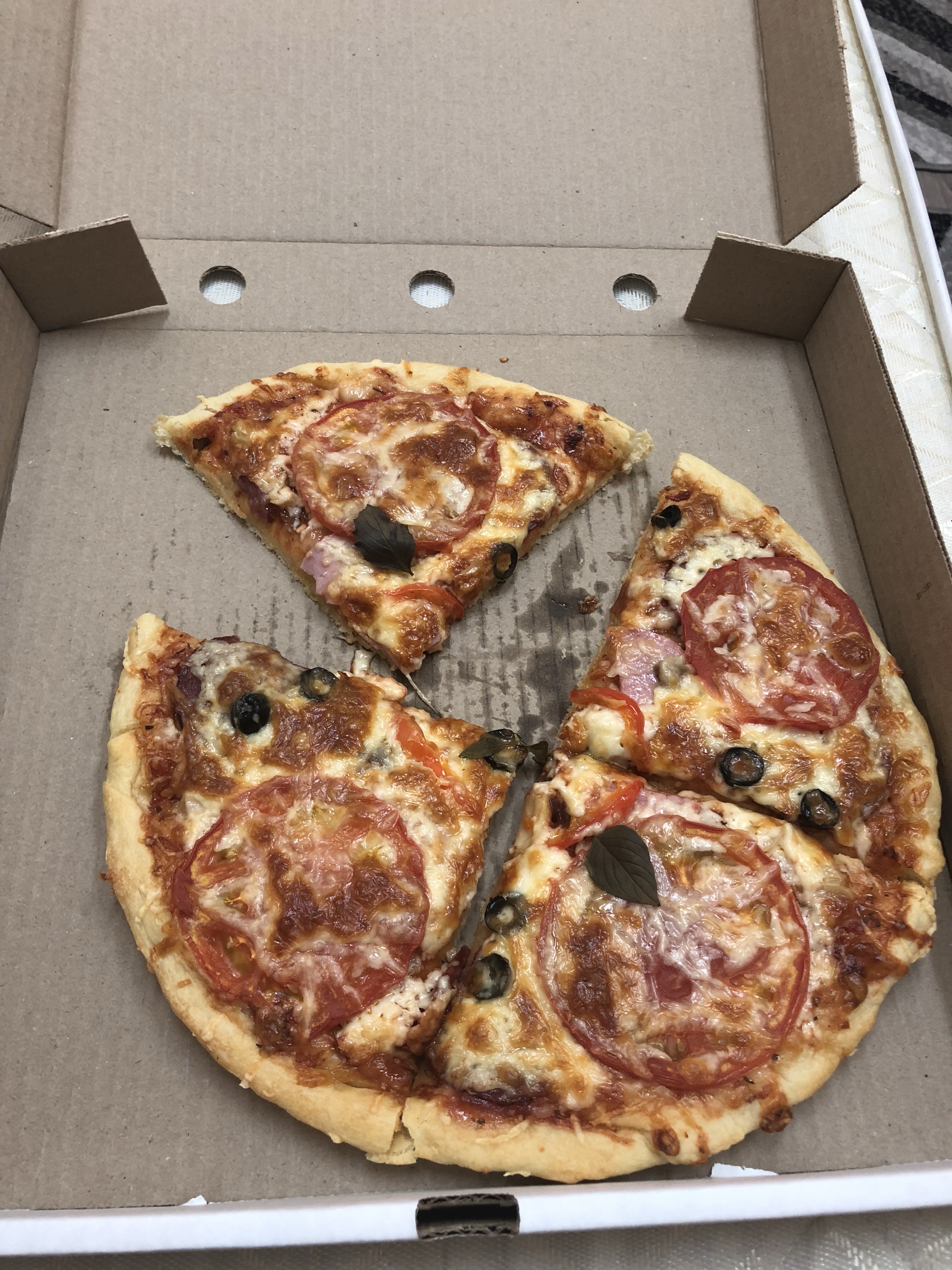 Other than the bike problems it was a great day! The scenery just got stunning! And the roads were great, high quality and winding with up and downhills. Seems that they are investing a lot to make this amazing place more accessible to tourists. 12 hours in total today and it took us a full week to get here but easily well worth it!

The plan for tomorrow is to visit lake Teletskoye, with light bikes leaving all unnecessary luggage at the hostel. The expectations are very high after todays super sceneries!