Posted by savonsurauttelijat on elokuu 12, 2018 0 Comments

Today then plan is to cross the border and visit Mongolia for one night. Before that, we decided to replace the spark plugs on Samis bike hoping that will solve the problems with engine ”dying”. We got to the carage soon after 9am and as we had not had breakfast, Mika went to buy some from grocery store. Meanwhile Sami made some room in the carage to fit the bike inside as it was raining occasionally. The carage was organised for us by the owner of the hostel, it was probably his friends place and we could use it for small fee. 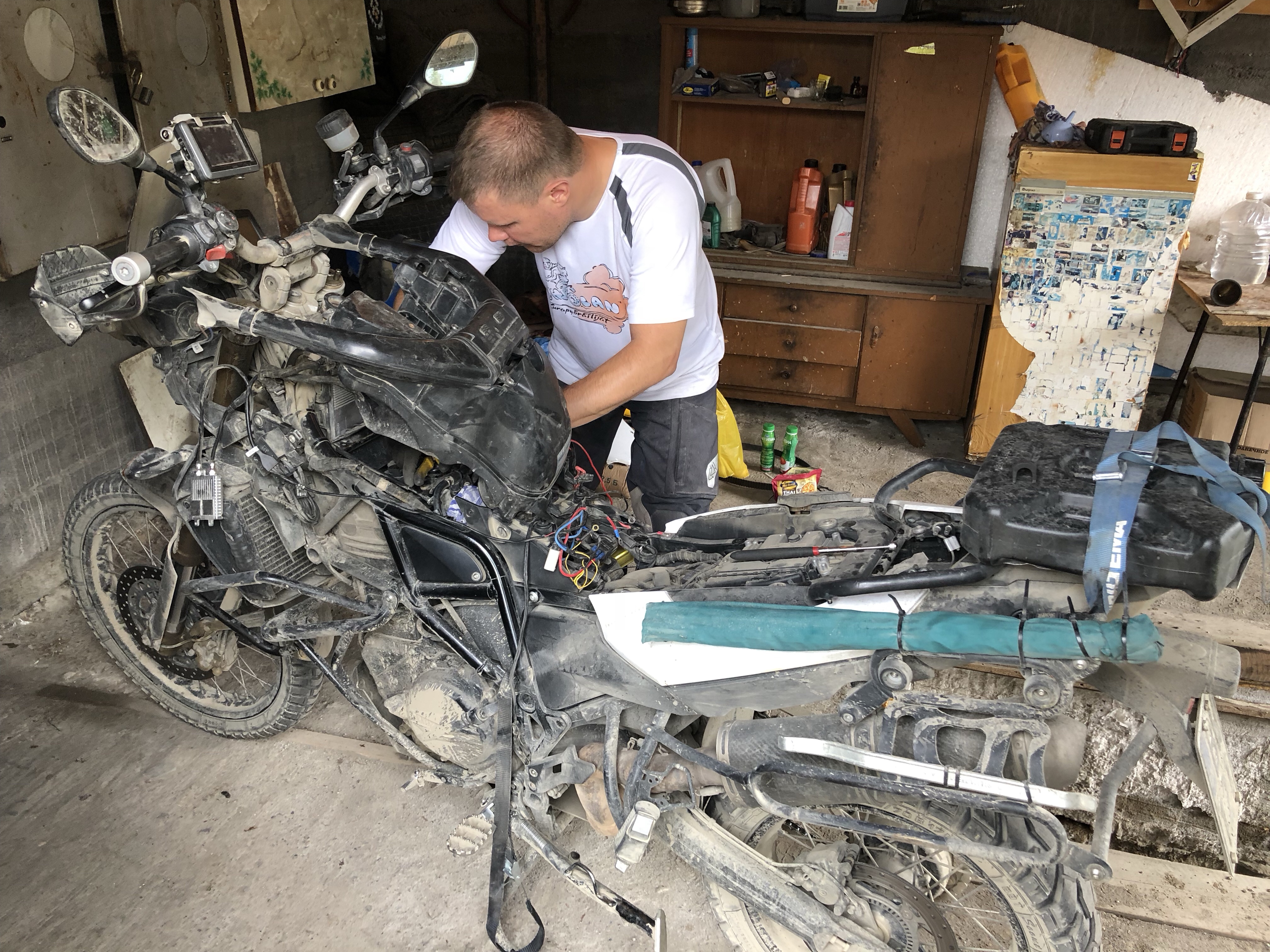 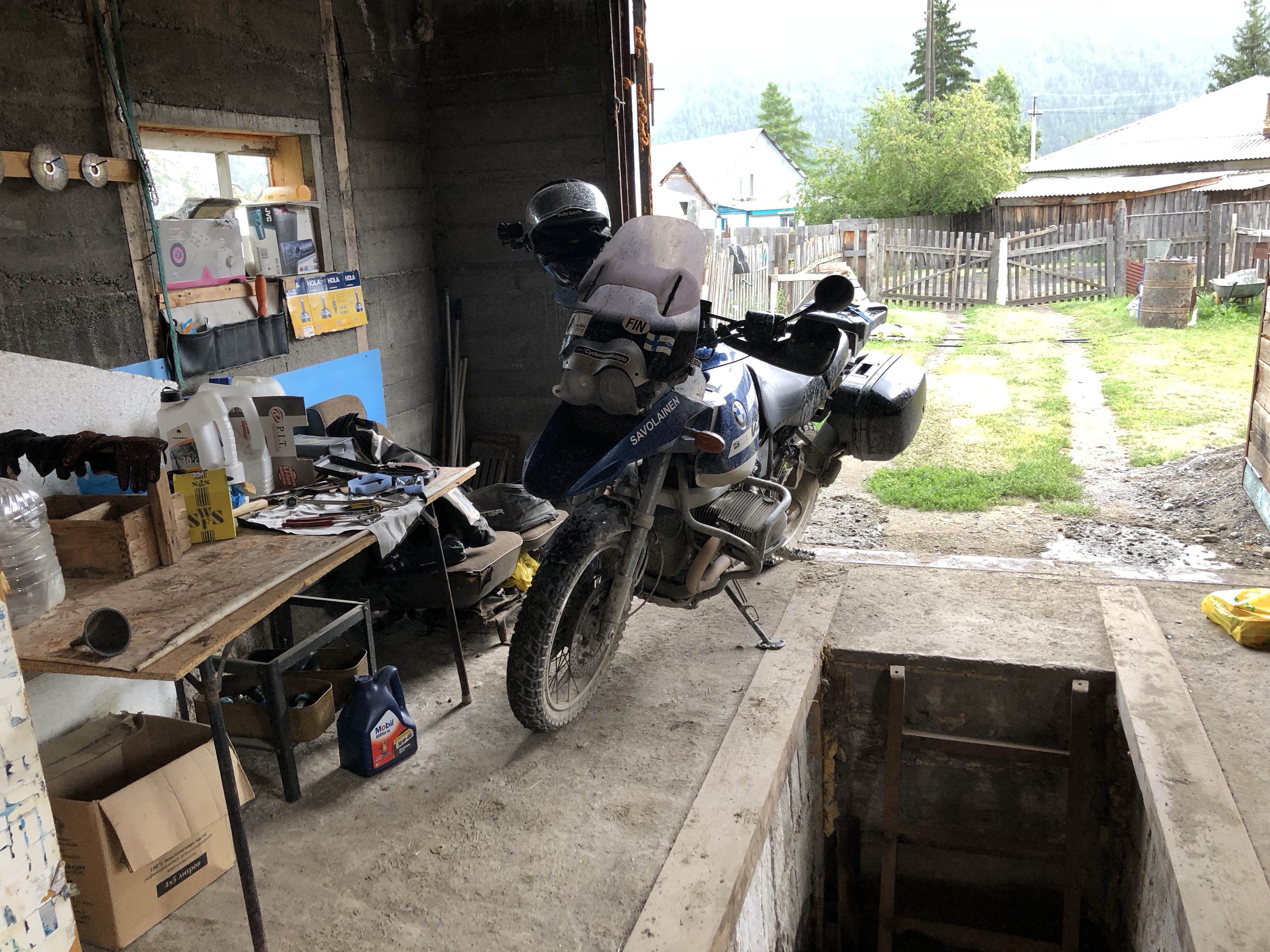 Sami was working with the bike and Mika prepared combined breakfast and lunch with camping stove. Replacing spark plugs is an easy task but requires some time on this bike model since quite some parts need to be removed to have access to the spark plugs. In less than three hours we were ready and had had our meal. Bike started well and actually worked fine the whole day. So lets see if this fix helped permanently or not. Mika secured the front blinkers with thread lock and this should hold the whole front better in place.

We rode back to hostel and packed for the trip to Mongolia, leaving as much as possible in the room. Somehow we managed to spend almost 2 hours. We then took of before 2pm and had to wear rain suits due to weather. In the beginning it was great mountain roads but the closer we got to the border the more boring the landscape got. At first refuel stop Mika noticed that his bikes rear shock absorber is leaking a bit oil. It seems the trip to lake Teletskoye yesterday was a bit too much for the old bike, having over 160 000 in the odometer. 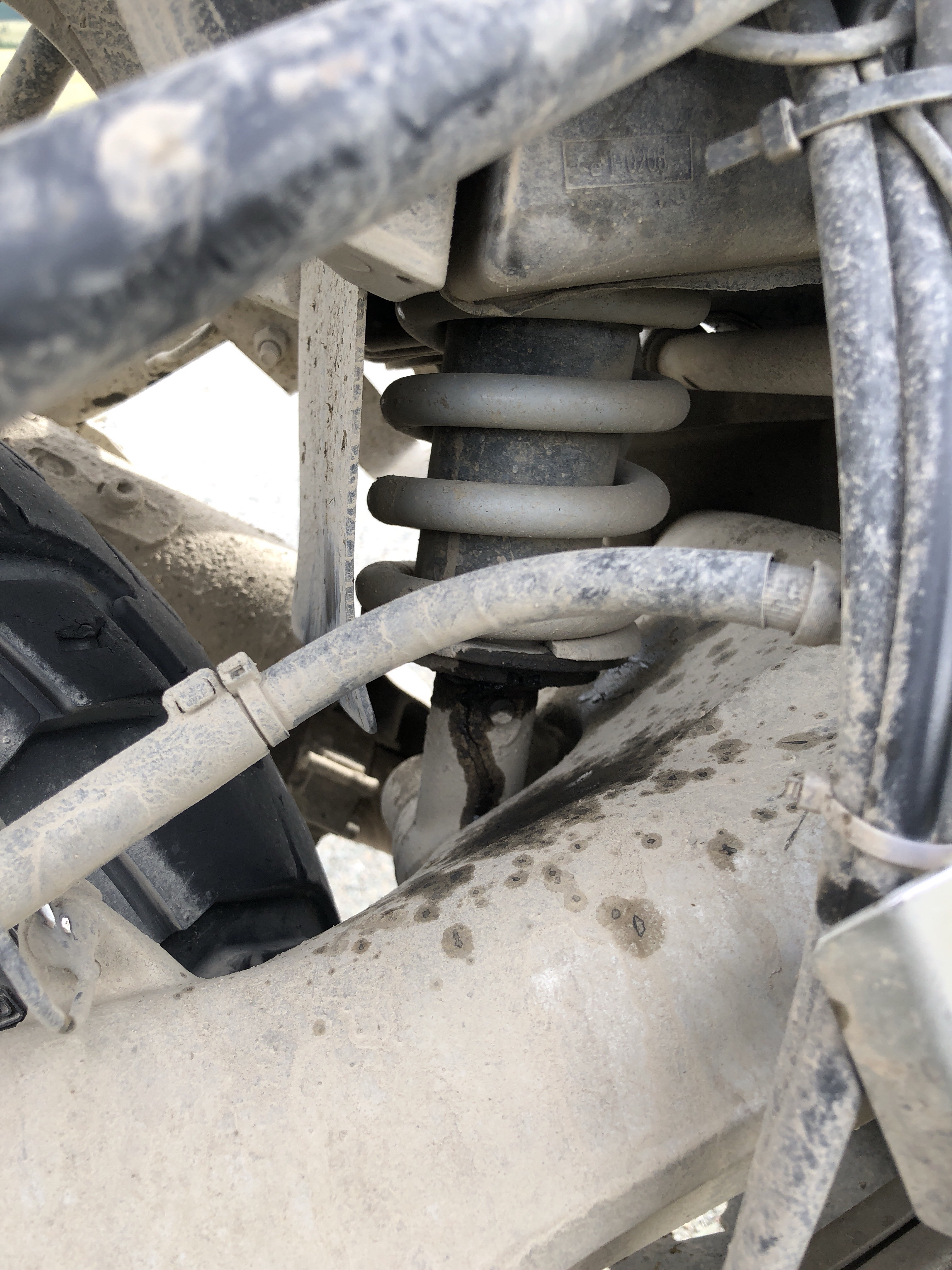 That would not stop us, especially on these roads, so we continued towards the border. As said it got very boring in the end and there was also strong side wind which made the riding difficult. There were some other motorcyclist on the same road, riding the other direction, but we did not stop to talk to them. We just wanted to get to Mongolia!

Finally we made it to the border and there was very short queue. And, as we soon found out, the reason for that was that the border was closed today. It might be open tomorrow, maybe. After a short discussion, we decided to turn around and ride back to Aktash. We also considered the option to stay overnight by the border, in a hotel close by, and then visit Mongolia the next day. 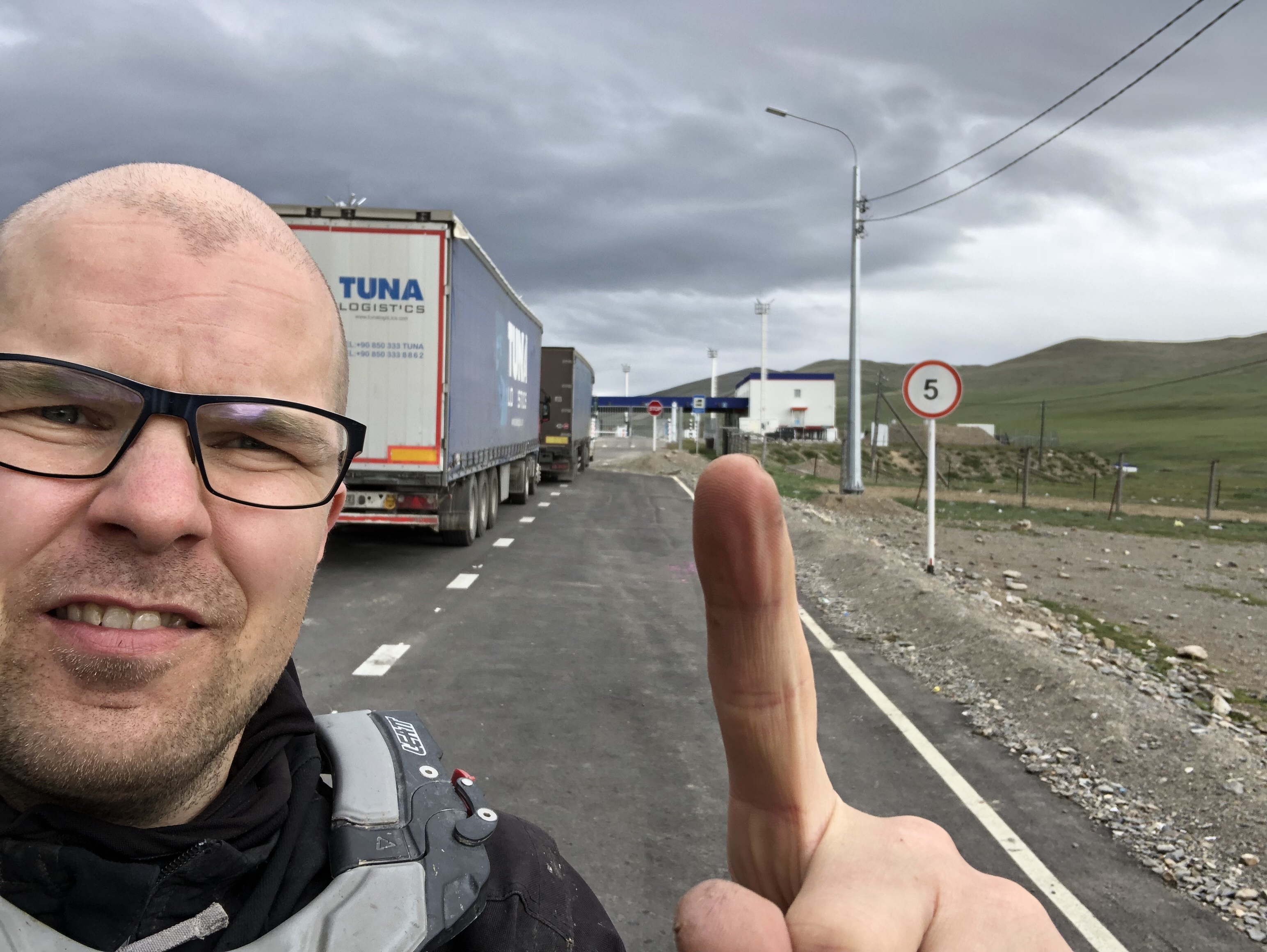 We decided not to since we had some issues with the bies and due to uncertanty with the border. We actually had to rethink the whole plan for the next day. Opetions were to continue according to current plan towards Kazakhstan just one day early, plan different route to Kazakhstan or go to Barnaul to fix Mikas bikes rear shock. It was evident that it will be a problem sooner or later.

On our way back we visited Altai Mars, a place looking like Mars planet with different colours sand etc. We just a bit missed the crossing, by 27 kms! Probably due to disappointment related to missing Mongolia. Mars was great place and the roads there were nice. 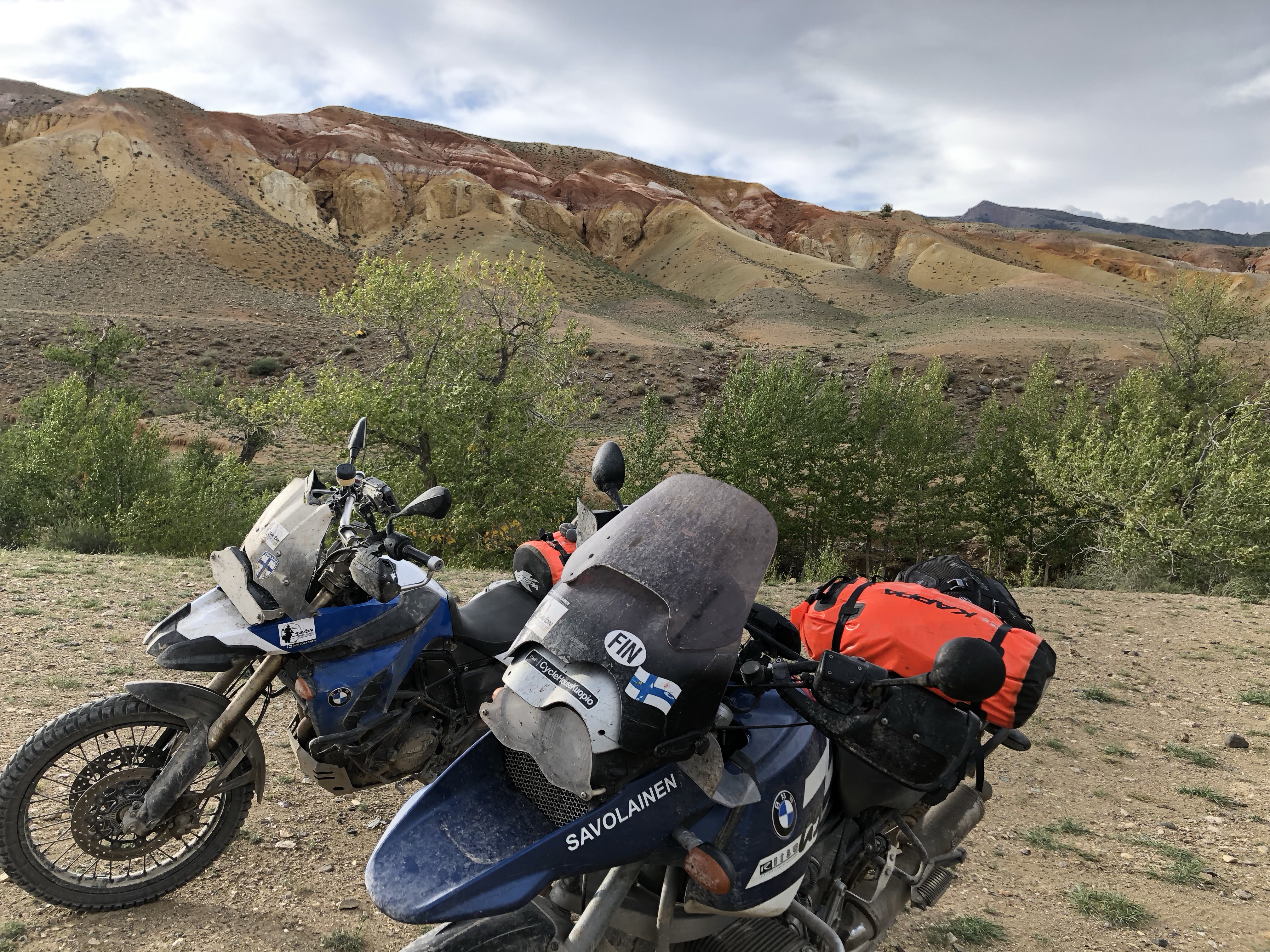 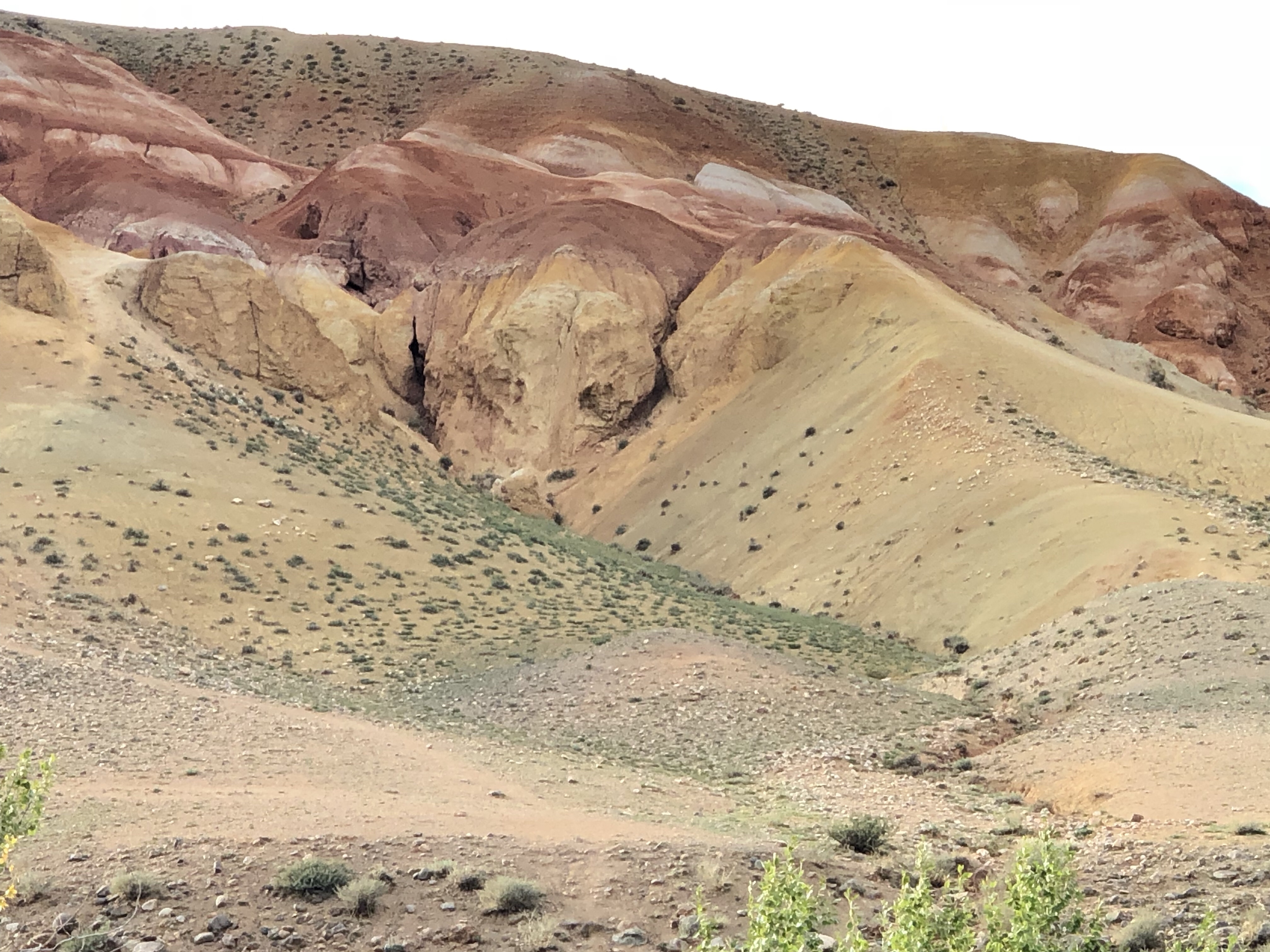 After visiting Mars, we rode to Aktash and had dinner in a cafe, this time we managed to find a cafe that was open. When we tried to see from the menu what to order, they asked us to come to the kitchen and choose from the pots and the pans spread around on the table and floor. We chose to have some kebab from one of the pots on the shelf under the table…lets see how the stomachs will cope with this.

After that we got back to the hostel room to plan how to proceed on the coming day. We did not make the final decicion yet but the most probable option now seems to be to continue towards Kazakhstan and try to fix Mikas bike either in Semey or in Astana.

Even though the distance today was not big, we were both quite tired after the day. And a bit disappointed with not getting to Mongolia but we had had prepared ourselves that it might be challenging to go there anyways. Maybe next time…

Actually we have now started returning home, the furthermost point of the trip was at the Mongolian border and now we are heading home-bound. Technical problems on the other hand is something that you will face sometimes, and in this case we consider that as increase of ”adventure rating” of the trip 🙂