Mika Savolainen in memoriam (in english)

Posted by savonsurauttelijat on toukokuu 9, 2020 0 Comments 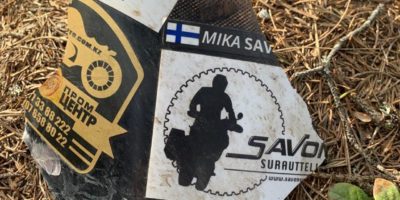 Mika, a motorist and the Savon Surauttelija!

You pulled me from custom bikes to dual sports, to adventures!
Honestly, just like you would have said, in the beginning you really did not know how to ride, and how would you since you never had even a moped. But you decided to learn, at the age of over 30, to become a motorist, from scratch. You bought a 125cc bike to practice and got the drivers license for bikes. Then you bought the small GS (650cc) and then after a few years the big bike, 1150GS, which you rode to so many places. And to add to all this, to further improve your riding skills, you bought a motocross bike, which you really used to practice and for sure improved a lot!

Luckily, we spent the last night and day together, after 2 months in covid-19 isolation, doing what we most like, riding bikes. We rode in the forest, in trails on really challenging places and you rode the MX bike like a pro!
The discussions we had that evening, were good and deep. By incident, we also touched the topic of how to ”go when leaving this planet” and you said you wanted to go with your (riding) boots on, quickly. Well, that did happen, but way too soon!

We had great adventures together, you were always the one who dared to speak out the dreams, whose determination got us through the planning. We travelled to north, to south and foremost to east, to sea shores and to mountains! Spectacular sceneries, magnificent places.
The implementation of any of these adventures was always a success. Sometimes we faced challenges but we never let them stop us, just hinder a bit, and what often was the best, we met amazing people due to these challenges.

And equally important, in another way, were the smaller rides nearby and the conversations we had while riding together.

You did show all of us great example about how the dreams are to be made true, not later but now! You truly lived!

On saturday May 9th, 2020 at around 7.30PM, Mika was riding bike on his way back home from a half-day trip to Parikkala, when he hit a moose and died immediately.