Posted by savonsurauttelijat on elokuu 13, 2017 0 Comments 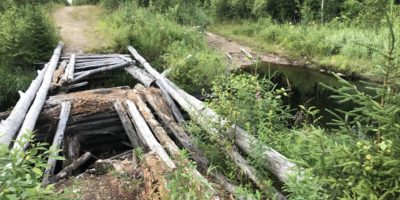 So we slept for two hours and woke up at 9am to look for breakfast before heading out to get Sami’s bike. We might not have been fully functional at that point…

The breakfast that the hotel served looked weird and was not even included in the room price. Therefore we decided to buy something on our way to police station. The good thing in going to the hotel breakfast room was that we got into contact with Marina who could translate our discussions during the visit and was very helpful. She even told us that she knows a mechanic who could help us if we cant fix the bike ourselves/with our tools. With the help from Marina we got taxi who was informed that we will stop at grocery store and then we continued to the police station.

When we arrived to Police station we met Vladimir who tried to tell us something but we couldn’t find out what without help from Marina. Vladi needed to go to work for short while but would come back and take us to his garage where we could try to fix the bike.

Video, interview with Sami by the police station: https://youtu.be/OLQMONidqe8

After few minutes Vladi came back and off we went. It was easy to get the bike out of the car compared to putting it in. Then Vladi had to go again, and Sami and Mika started putting the bike together again.

When Vladi came back, Mika got a ride to pickup his bike and battery charger from the hotel. What an unique experience, Mika was now travelling in the back of Russian police car (right where the criminals travel, we assume)! Additionally, when door got stuck so he almost could not get out at all. With some brutal force the door opened and he got away… Then Mika rode his bike to the garage through the ”city” of Suojärvi.

We put the bike together quite quickly and tried to get it started but with no luck. After some consideration we called Marina to ask the mechanic to help us. Within just few minutes Juri arrived and it was clear from the first minute that we knew what he was doing…maybe this was not the first time he met an engine with water inside. He gave us clear directions what to do and took of to get some oil and filters.

We got some of the work done before Juri came back. Unfortunately the oil filter did not fit so we had to clean the old filter instead. There was no new air filter available and the old one was all wet so we had to dry it with ”hot air gannon”, Mika was doing that throughout the day and eventually the air started to flow through the filter again.

It took us the whole day to get the bike up and running again. We had to remove all the covers, air filter housing, battery and housing, all engine guards, exhaust, catalytic converter and silencer etc. There was no water in the exchaust/catalytic converter but better safe than sorry. However in the engine there was plenty of water. The oil was ”cappuccino”, coloured like cream. We replaced the oil three times to get all the water out. Twice we used some ”no-name” oil and the third time Motul which we had to pour from 3 different half empty cans, obviously better oils are not easily available in Suojärvi. Also we removed all the fuel from the tank to secure there is no water there or in the fuel pump/filter, luckily there wasn’t.

Juri had put some chemical inside the cylinders through the spark plug holes and when the oil was changed we could run the engine with the started. The chemical came out like a fountain! He added chemical couple of times and then he was happy.

Finally after 6pm the bike was up and running again, except for rear tyre that had almost no air. It was time to go back to hotel.

We also tried to offer Vladimir and Max a dinner to express our gratitude but unfortunately they still had to work. We also find out that there were no real restaurants in the town but we could get something from Cafe Smile.

We went to the hotel, took a shower (which was quite an experience as the shower was not really working and the water was brownish) and headed out to Cafe Smile on foot. We also informed our host Irina in Petrozavodsk that we will arrive in the morning, some 1,5 days late. Naturally we had informed her earlier about the problems as well.

The dinner was hamburger, not too good but anything worked well as it was our first meal of the day. The did not understand english at the cafe so we could order only by pointing the desired meal with finger. Worked well enough.

After the dinner we bought some snacks and beers that we enjoyed just outside the hotel.

Soon we got annoyed to the insects and moved inside to the ”lounge” to continue going through all of what had happened during the last days. Soon after we went to bed.

This day did not consist of any riding but regardless of that, it really was an experience. This trip really has became an adventure!