Posted by savonsurauttelijat on elokuu 13, 2017 2 Comments 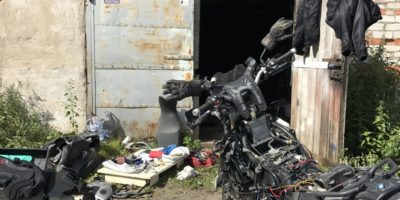 The day started with packing of our gear at Suojärvi Karelia hotel. Sami had more to pack and therefore Mika was ready earlier. He went to withdraw some cash that would be needed when paying the accommodation at Petrozavodsk. Also we might need to pay in cash for fuel, and we had found out that there was no fuel available in Suojärvi, closest place to get tanks filled was 60km’s away.

Mika went to bankomat only to find out that now 2 out of 2 of the bankomats in the town were ”Kaput” – out of order. So he went to wait for Sami in the agree crossroads but got bored and called Sami what took him so long. Sami had been trying to find a place to add air to rear wheel that had to be emptied in the Uaz-episode. It was not easy to get the information so the receptionist ended up calling someone who would come and help us in finnish.

So Mika had to come back to hotel and soon also came a taxi with an elderly lady speaking Karelian dialect of Finnish language, that sounded pretty funny. The lady could not explain where to go for air so she took Mika there with taxi so he could learn the route. He also got to learn quite a bit about the history of the town…

When Mika came back, Sami was ready with packing the bike and we could start immediately.

We got the tyre pressures fixed and got some photos taken with a local boy on Mika’s bike. Then we could finally start the ride towards Petrozavodsk.

The fuel was a bit of a problem for Mika as he had ridden more the day before. The reserve fuel was in use for quite many kilometers before we reached the fuel station. Luckily we had just enough cash to buy enough fuel so we could make it to Petrozavodsk. Mika’s bike has tank of 20 liters and he filled it with almost 20 liters…quite close one might say.

Now we only had about 60km’s to Petrozavodsk and we sent a message to Irina, our host-to-be there. The roads were boring and paved but we were happy to get to Petrozavodsk. We quite easily found the address we were looking for.

Video, On our way to Petrozavodsk: https://youtu.be/huwKG0gKm5o

However we could not find any signs etc., just apartment blocks. We rode around the yard and soon we were stopped by Irina. She asked Mika if he spoke german or russian and when he said ”no, just english” she would continue in german 🙂 We could not understand all of it but enough anyways.

Video, arrival in Petrozavodsk and meeting with Irina: https://youtu.be/dSzwiXw6Eew

She made it clear that we could not leave the bikes unattended even for a minute so Sami had to leave with the bikes while Mika went to see the apartment with Irina. There was nice lunch waiting for us but first we were supposed to go and see the where is the garage where we can leave the bikes for the night. It was not far but hard to explain where. Getting there consisted of a detour to get accross main street and riding behind Irina who was running on the gravel road for couple of blocks.

The garage door was too small for the bikes so Irina organised place for our bikes at one of her neighbours garage. We agreed to bring the bikes later in the evening and went for lunch at the apartment.

After very nice lunch Irina said she would make us dinner when we are back, just let her know 30mins before. We told her it might be late but she said it is no problem.

Then we took of and started on a route that we had planned for our first day in Petrozavodsk, route towards lake Syväri in south. We filled the fuel tanks and just within few kilometers we were of the pavement and enjoying nice smallish gravel road.

The road became excellent and lasted more than 20 kms until we reached a small village where we ate icecreams before continuing. Road so far had had quite a bit of small water puddles and we build ourselves a good routine on handling those. Once on our way to the village Mika’s front brake was lost but it started to work again right away and since we could not find any problems, we decided to continue carefully.

Also Sami had a moment with one of the puddles appearing from the middle of nowhere, that caused some situation but nothing too serious. Mika said it looked quite bad from his angle, though…

After the ice-cream break it seemed that we would need to continue quite a bit on paved roads but luckily nothing is for sure in Russia. The nature of the road changed and it became very nice in a short while. Loads of ruts and puddles, real Russian rollercoaster! We could not proceed very fast but we enjoyed every second of it.

After some time we would come to a real muddy ”road” that was very slippery and we even had to build small bridges using the logs that were laying around. Now the progress was very slow but we still enjoyed it a lot.

Video, to the muddy forest road we go: https://youtu.be/cT9awf8MneA

After some 6 kilometers the road got better again. Then we had to start heading back ”home” and we started following the route navigators told us, that would be about 60km’s. It was super enjoyable roads, quite fast but required active riding.

It seemed we will make it early but the after about 30km’s we were blocked by a river with broken bridge. There was a side-pass but it was way too deep to even cross on foot.

We had to turn around and that meant about 2 hours of extra riding. We started to be a bit tired and the challenging roads made it risky but we made through well and the roads got a bit bigger and we went through some villages and followed the coast of lake Onegin.

On our way back we SMS’d Irina that we would be there soon.

We took the bikes to the garage and then headed to the apartment. Our clothes we very muddy so we were quite worried how Irina would like that in her apartment. She surprised us by telling that offroading (car) is her hobby, she is a co-driver, and she did not mind the mud at all.

We were back at 10pm and it really was a pleasure the get to wash all the mud off in the shower and the have great dinner. Irina sure is one lively lady with thousands of stories, and she does tell them with all the energy and passion!

We were pretty tired after the day but in a positive way, it had been a great day with great riding and roads!