Posted by savonsurauttelijat on heinäkuu 20, 2019 0 Comments

In the morning we tried to have early breakfast but the breakfast room was locked. The security guard told us to wait some 20mins and it should be open. We came back then but the door was still locked. Guard said we should go outside and that was succesful. After breakfast we packed our stuff and wrapped everything on the bikes. 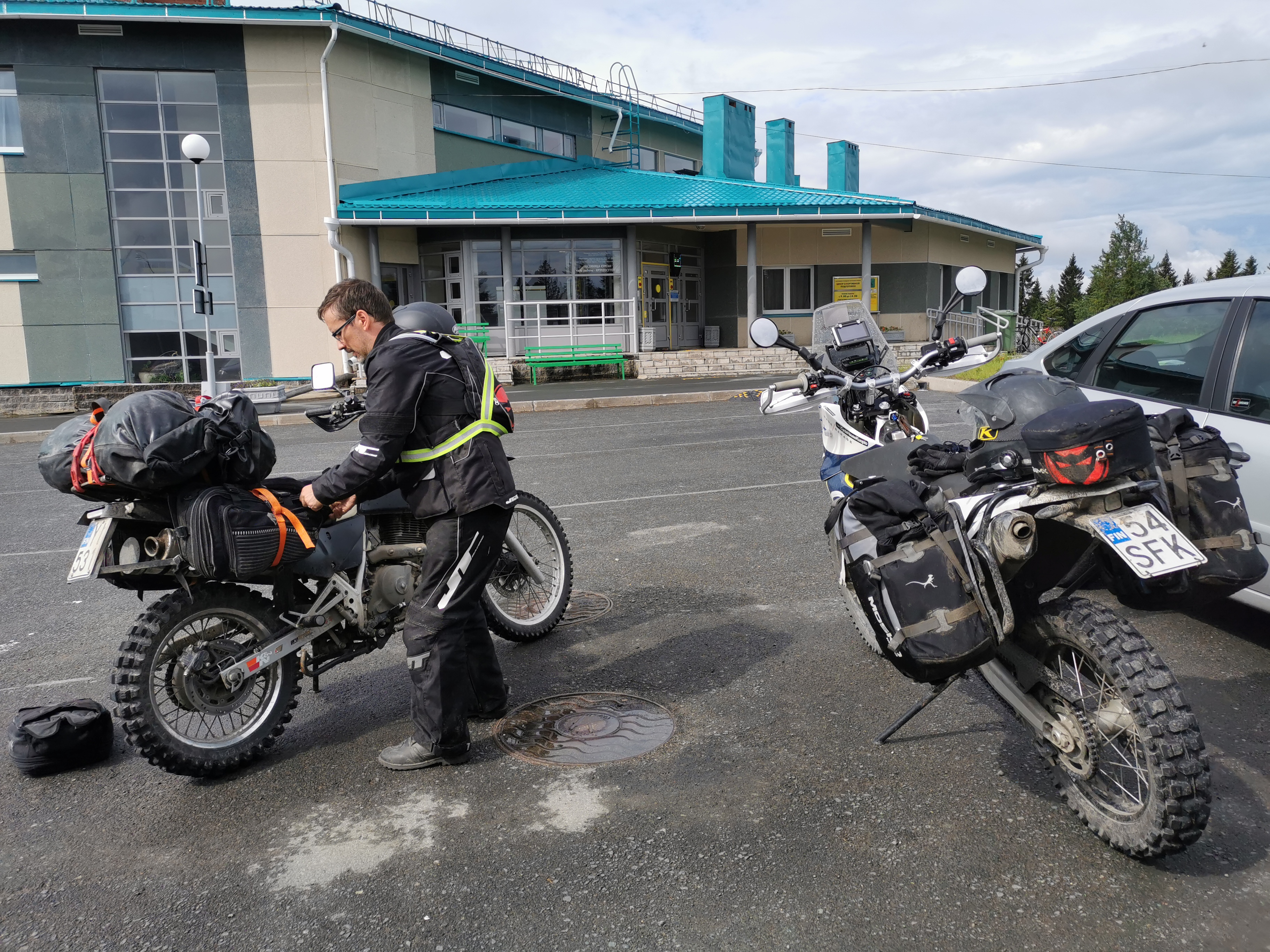 The engines started at 10.15 am and the weather was nice, about 18 degrees Celsius and cloudy but not rainy. Unfortunately our route was on paved roads but atleast we made good progress and in no time we were fueling up the bikes at Essoyla some 80 kms from Petrozavodsk. 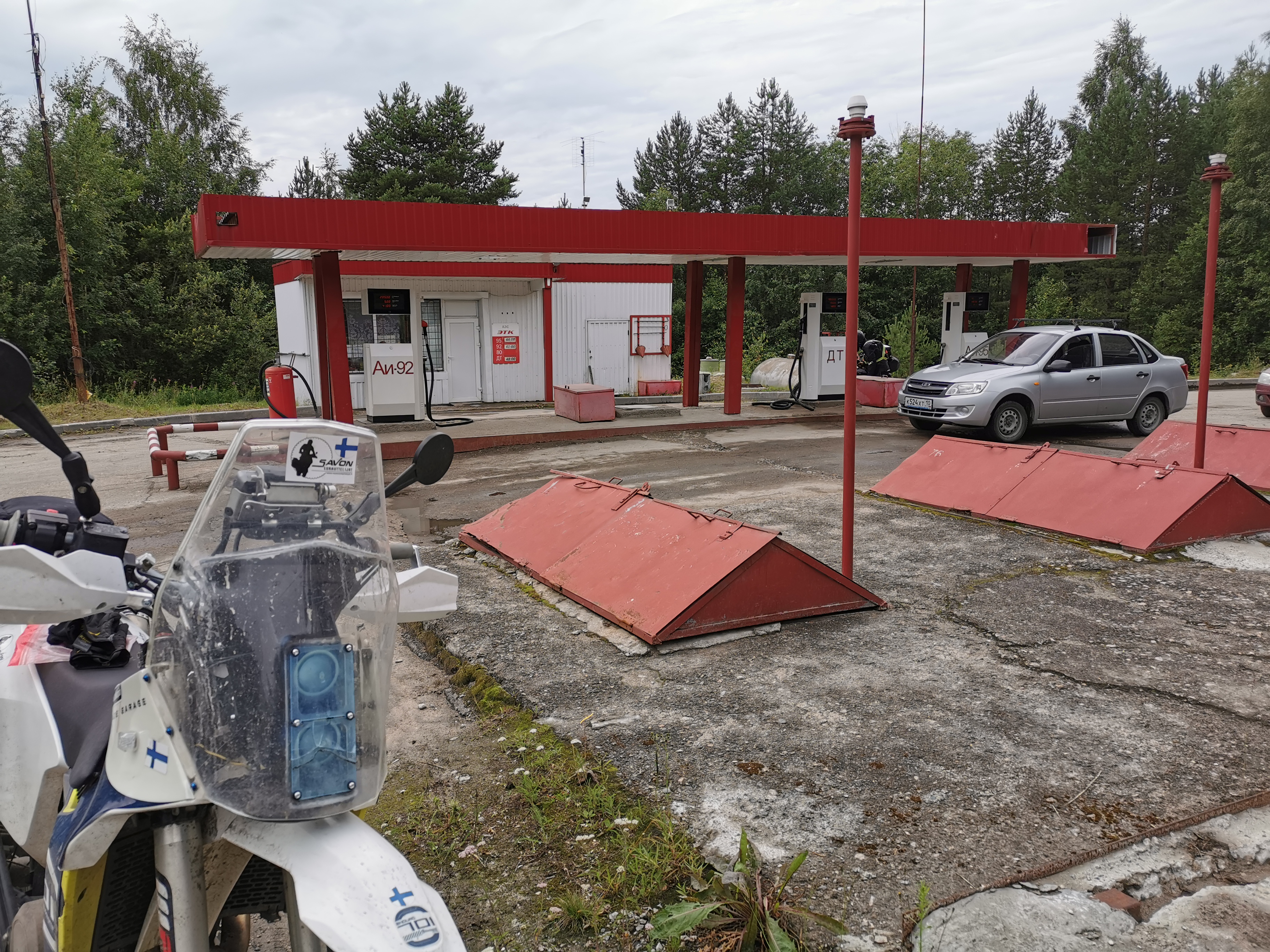 At that station Sami had been earlier with Mika and that time it was very close Mika did not run out of fuel before getting to the station.

Soon after Essoyla we got to a great gravel road for some 40kms and then we took a right from a crossing to a road that actually was more of a tractor track than a road. 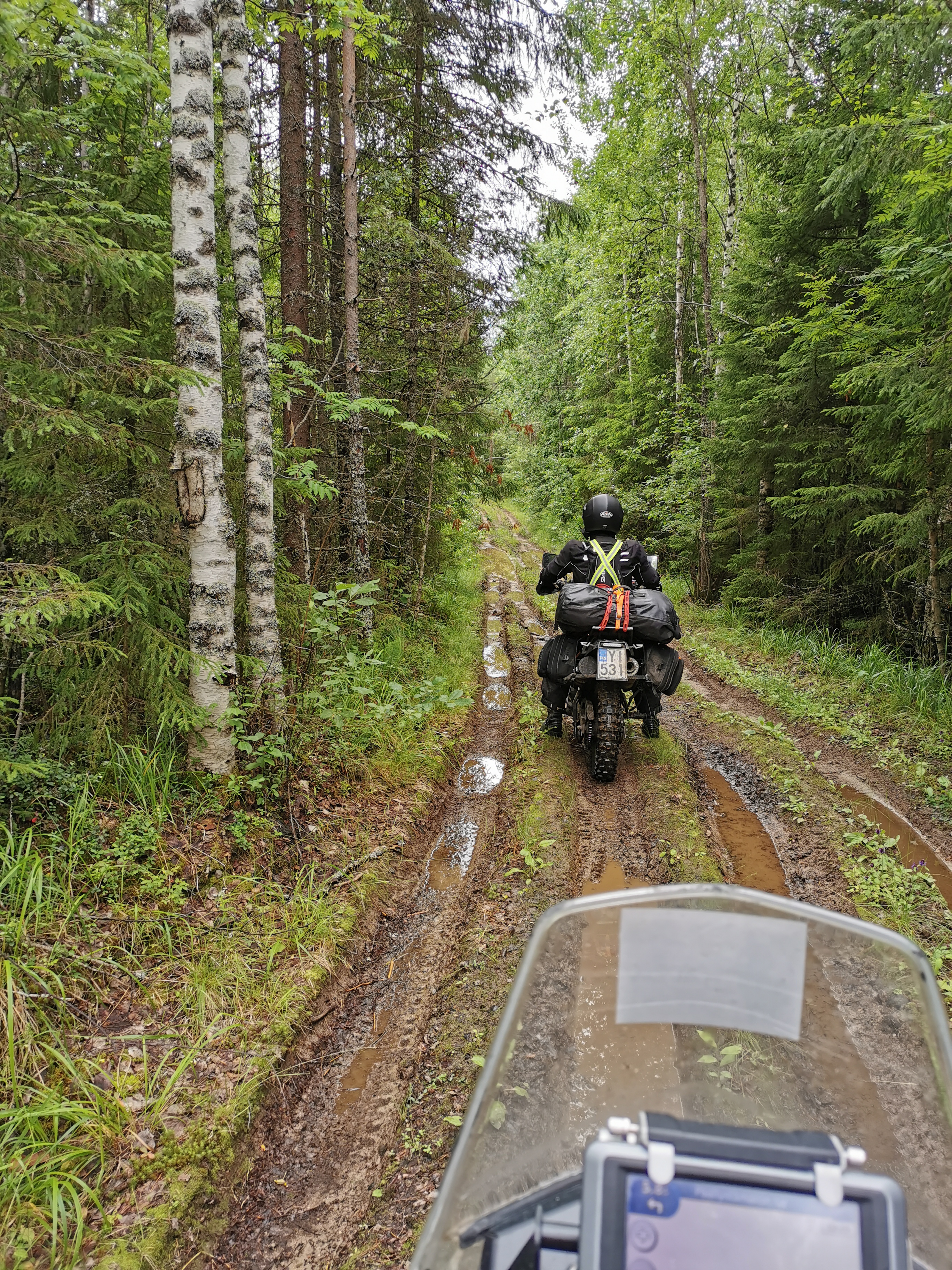 We continued on that ”road” for about 2-3 kms and it got more difficult all the time. Then when we reached a section built of logs placed side by side across the road, we decided to turn around as the road was not heading to were it was supposed to based on the map. This detour was in total 15kms and then we continued on a very good gravel road.

For 50 kms we were cruising along a exceptionally good (for Russia) gravel road and then reached village of Koivuselka. From there started this trips most challenging and best section (might not have felt like best at the time). At first it was a grooved, a bit slippery and muddy forest road and it seemed someone had ridden a motorcycle there. Soon the road got worse and somewhere the tracks of the other motorcycle vanished (there were 2 crossings to other similar ”roads”). Soon the road started to be rather wet and more and more slippery and muddy. First bigger water puddle was not very long but it was surprisingly deep. 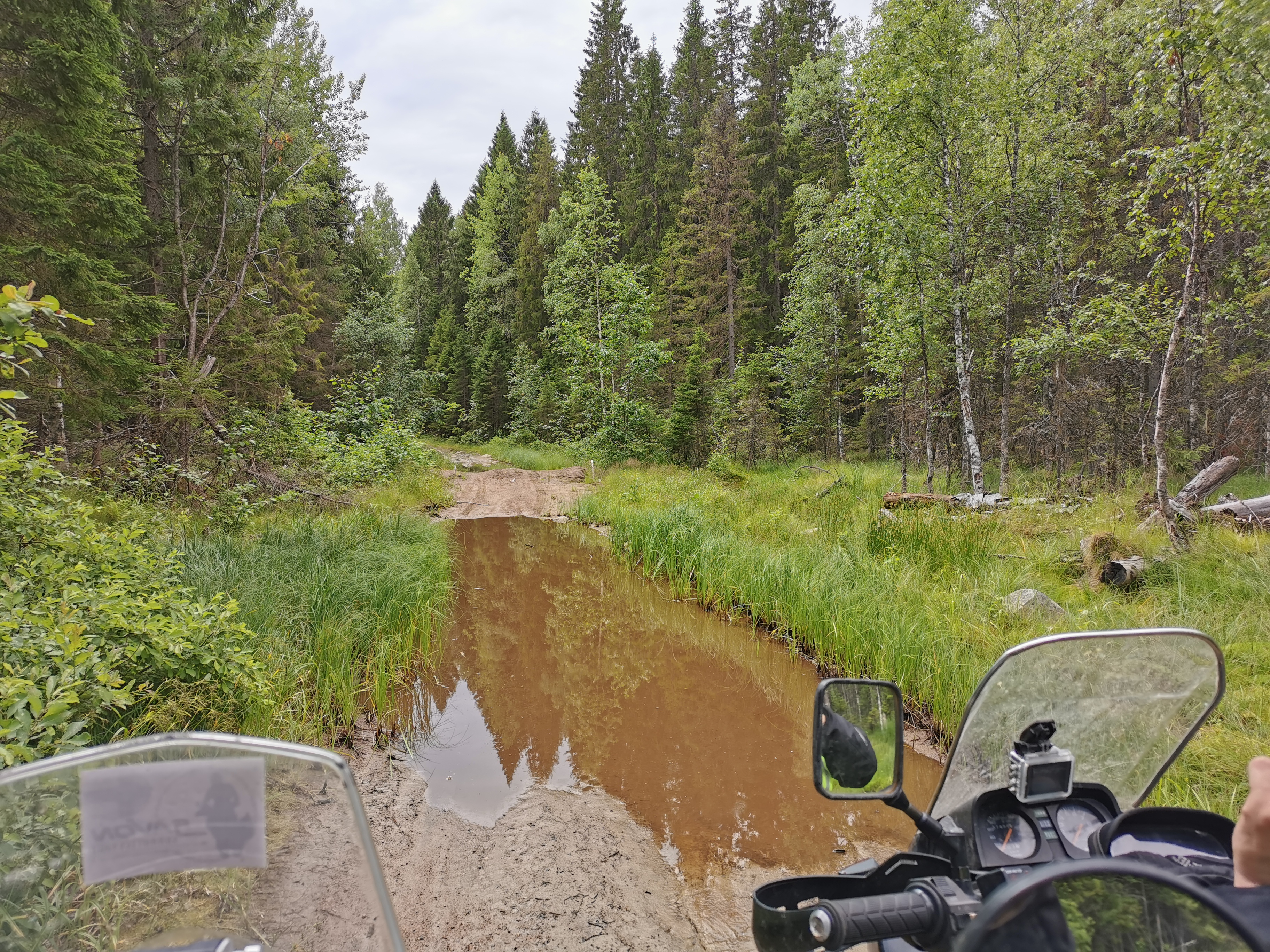 The second bigger puddle was challenging due to a underwater log and a large boulder which we luckily noticed when scouting proper line before riding in. We took the crossing carefully and that was the correct choise, it was really challenging. 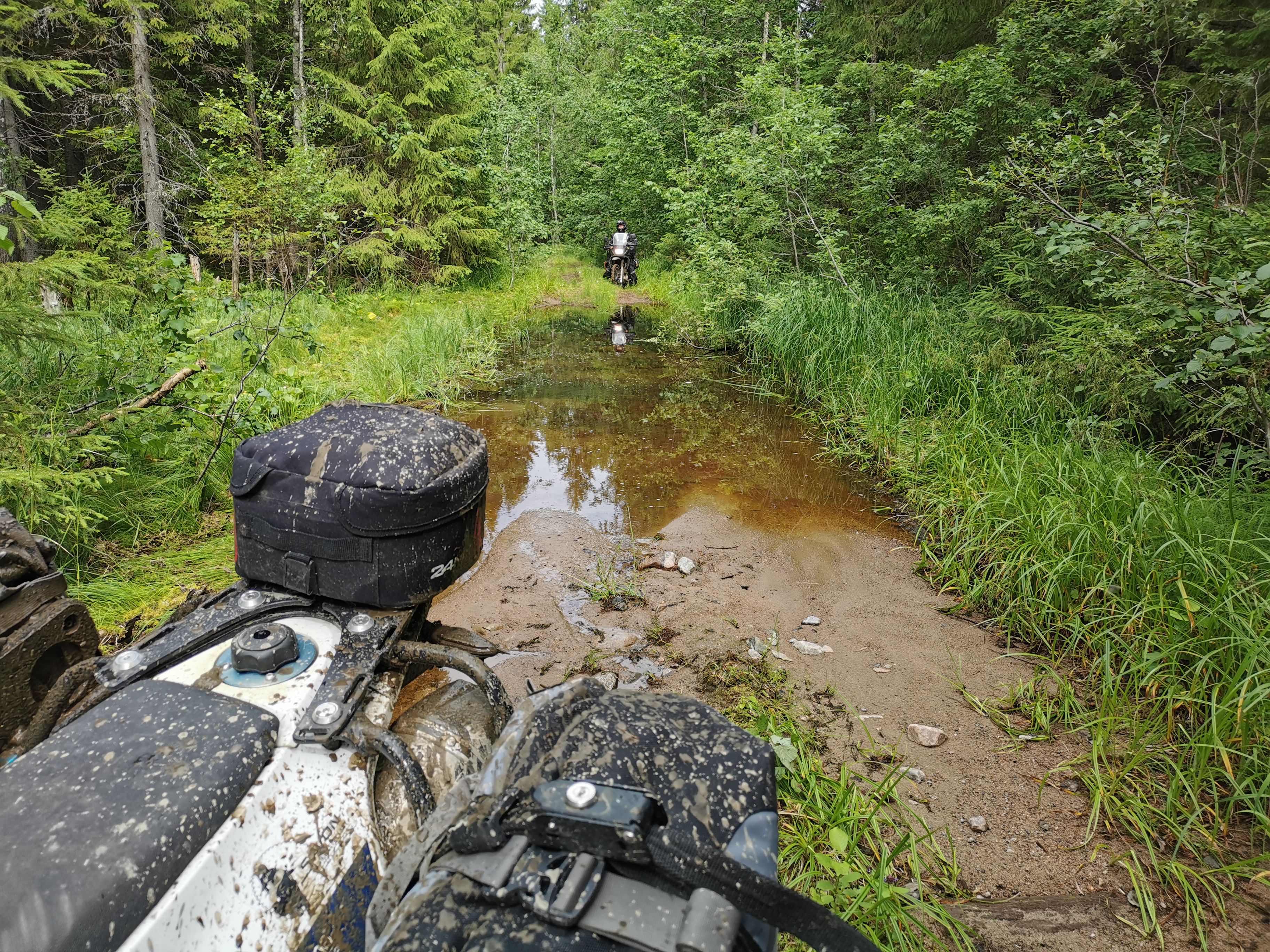 When arriving this whole challenging road, the navigations system said it is 42kms to the next turn and as the road got worse and worse, we started to feel a bit hopeless. Sometimes the road consisted of deep grooves in muddy ground. We had to be very careful on those sections. And in one place we reached an overgrown, grassy area between some old fields or similar. Akis front tyre hit a groove that was invisibledue to grass and he dropped the bike in slow speed. No harm done and we continued after a break. The break was really needed as the weather was warm and the riding hard so we were sweating a lot. At this point we also felt quite unsure if the road will continue through the area and meet a proper road somewhere or it will just disappear. We had already ridden about 10kms in such challenging terrain that we would not be able to return without longer break and a lunch.

However we carried on and the road did actually continue, even though it was in varying condition. Most of the worst parts were already behind us but there were still some bad parts.

In the end the challenging ”road” was 15kms long and it was followed by a bit better, sandy road. We took a break here, ate some energy bars and celebrated a bit as we had made through quite a challenging road.

We had to pay attention also afterwards since there were grooves on the road, made by logging trucks. Bit by bit the road got better and better gravel road and after 30kms we reached Vidlitsa. There we saw kafe signs and entered a building that however did not have a cafe. Actually closest cafe would be 40kms away and in wrong direction for us. 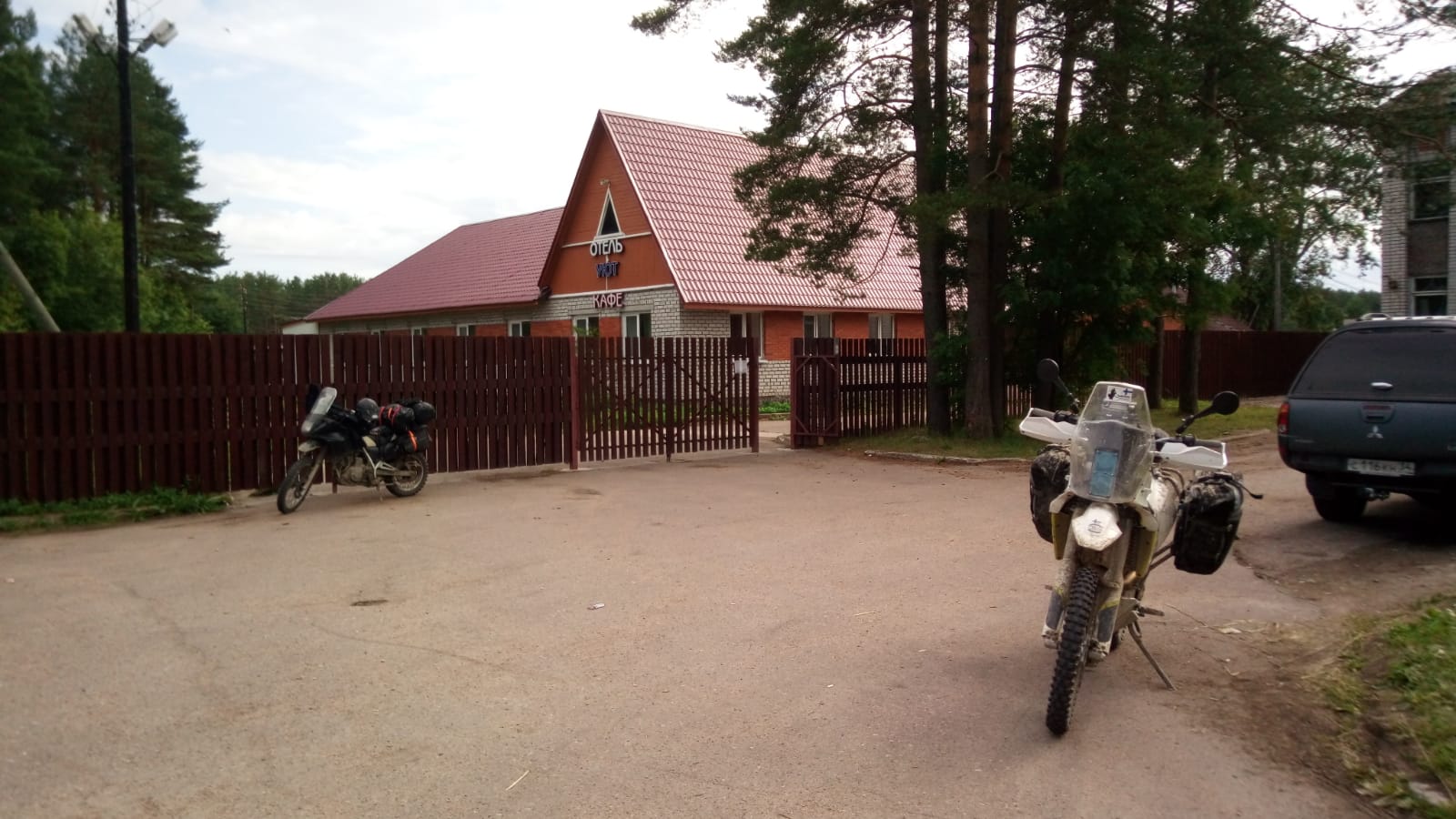 The bikes are nicely covered in mud…hard but great fun! 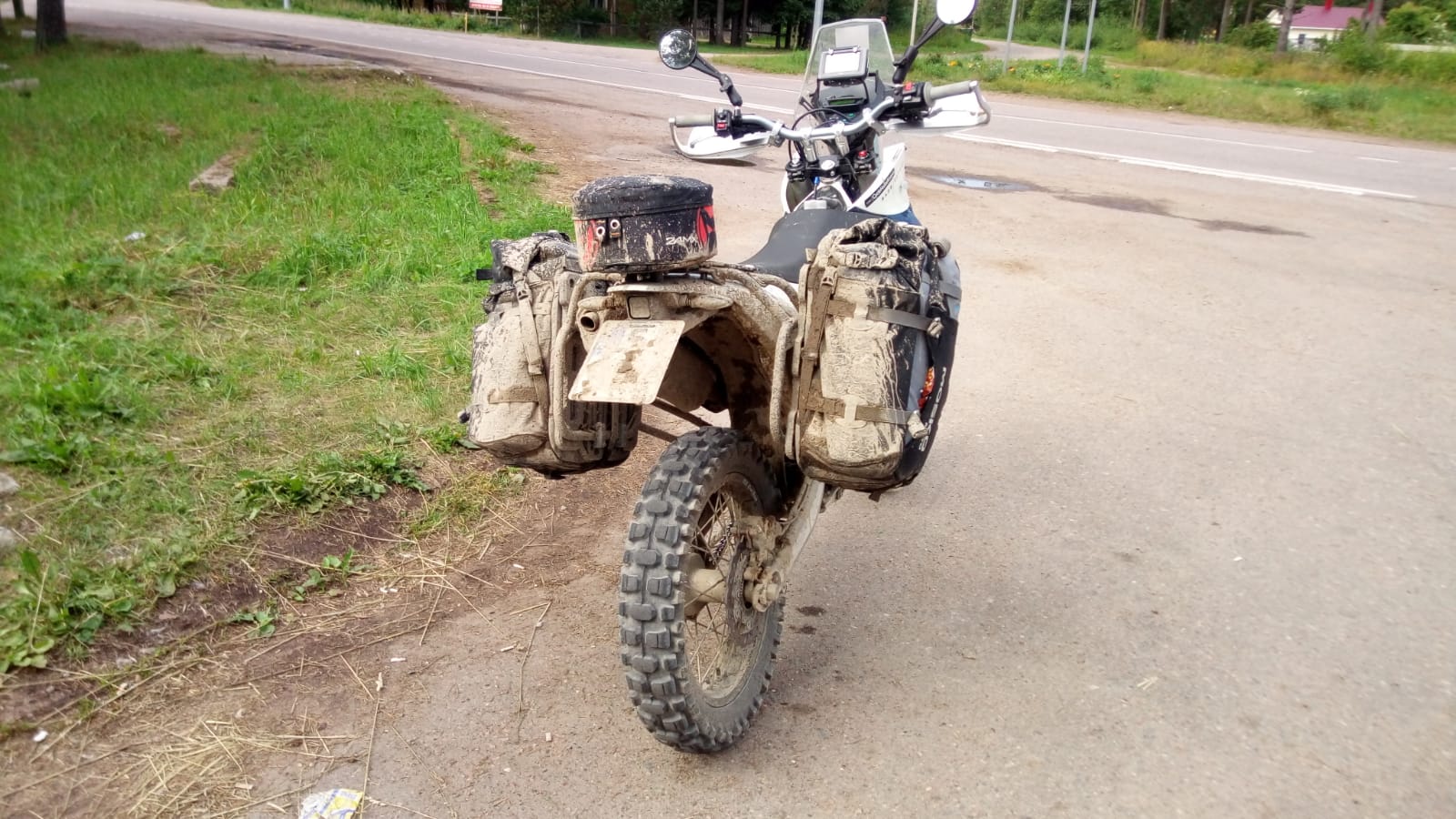 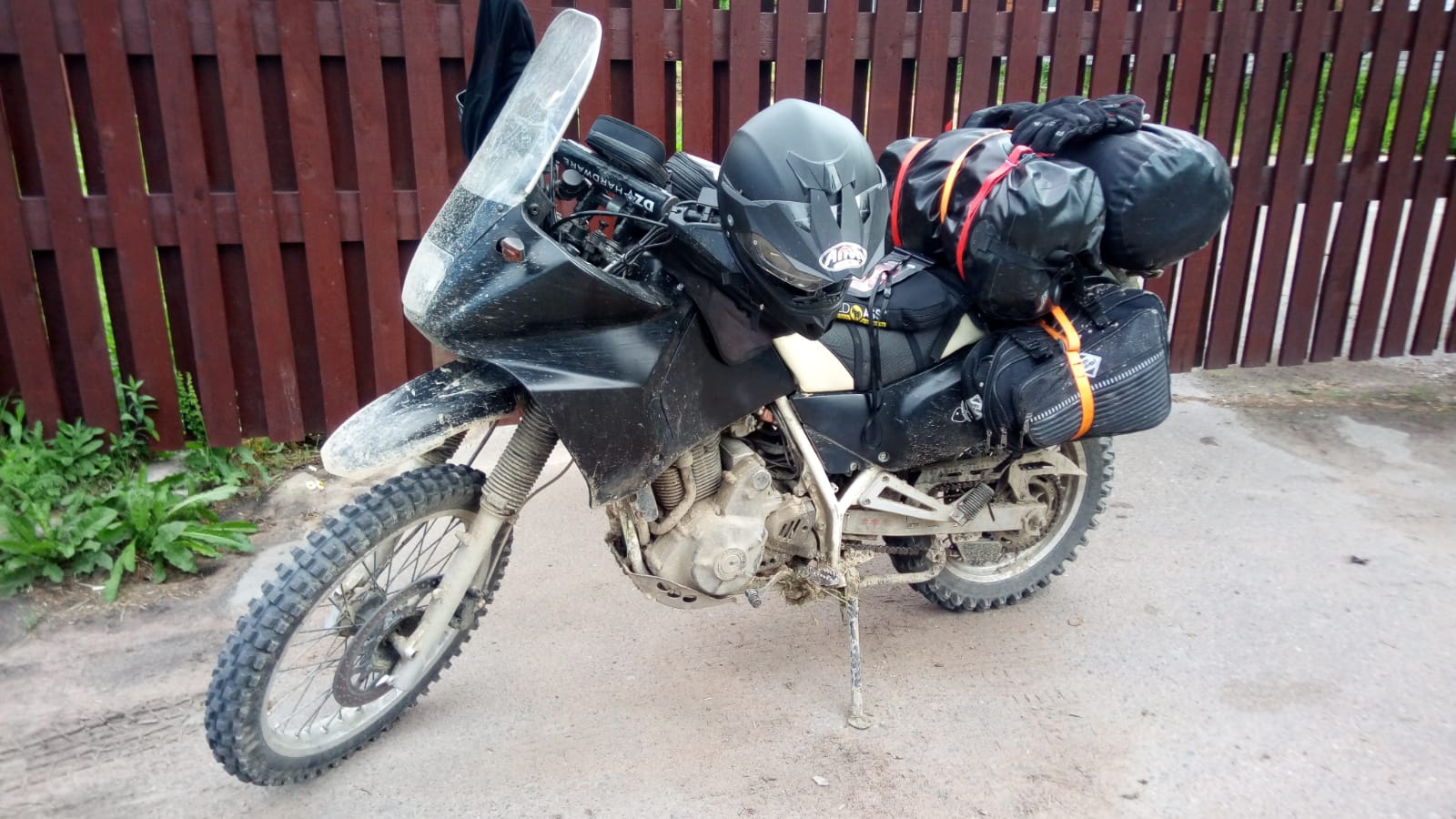 As we did not find a cafe, we bought ice-creams from the store to cool ourselves a bit. 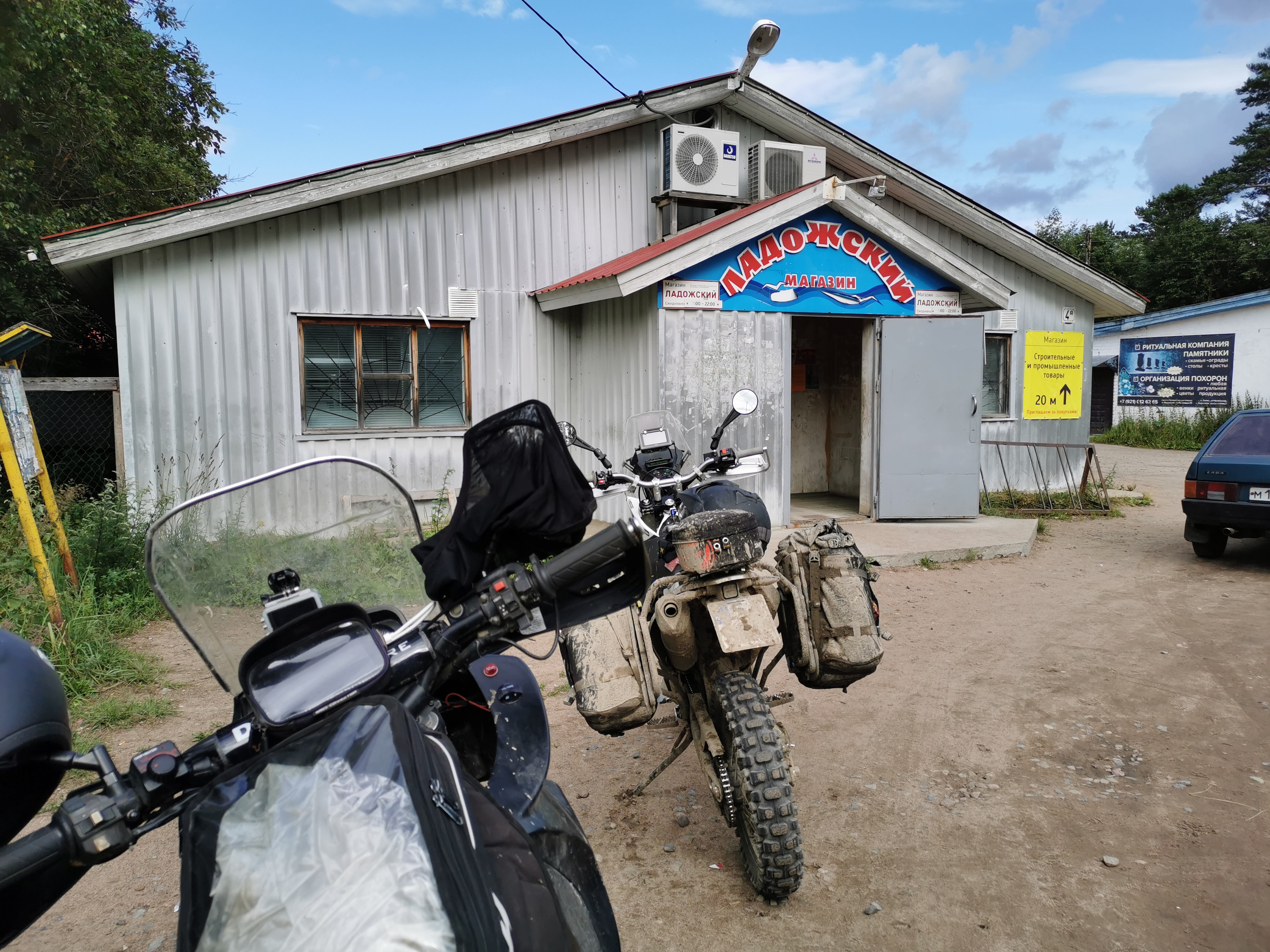 Road from Vidlitsa to Pitkyaranta was a 90km nice, winding paved road. Some parts were in better condition, some worse. In the middle they were building new road and there were some traffic lights at the roadworks. Usually we were waved to ignore red lights but 2 times we had to wait.

We arrived to Pitkyaranta soon after 5pm and after short sightseeing and fueling the bikes, we started searching our hotel. That took half an hour and required asking guidance twice. Only after a local lady called the ”hotel” things got sorted. The hotel was actually an apartment in an apartment bulding. The owner came after 10 minutes of waiting and took us to the 5tf floor apartment and naturally there was no elevator. 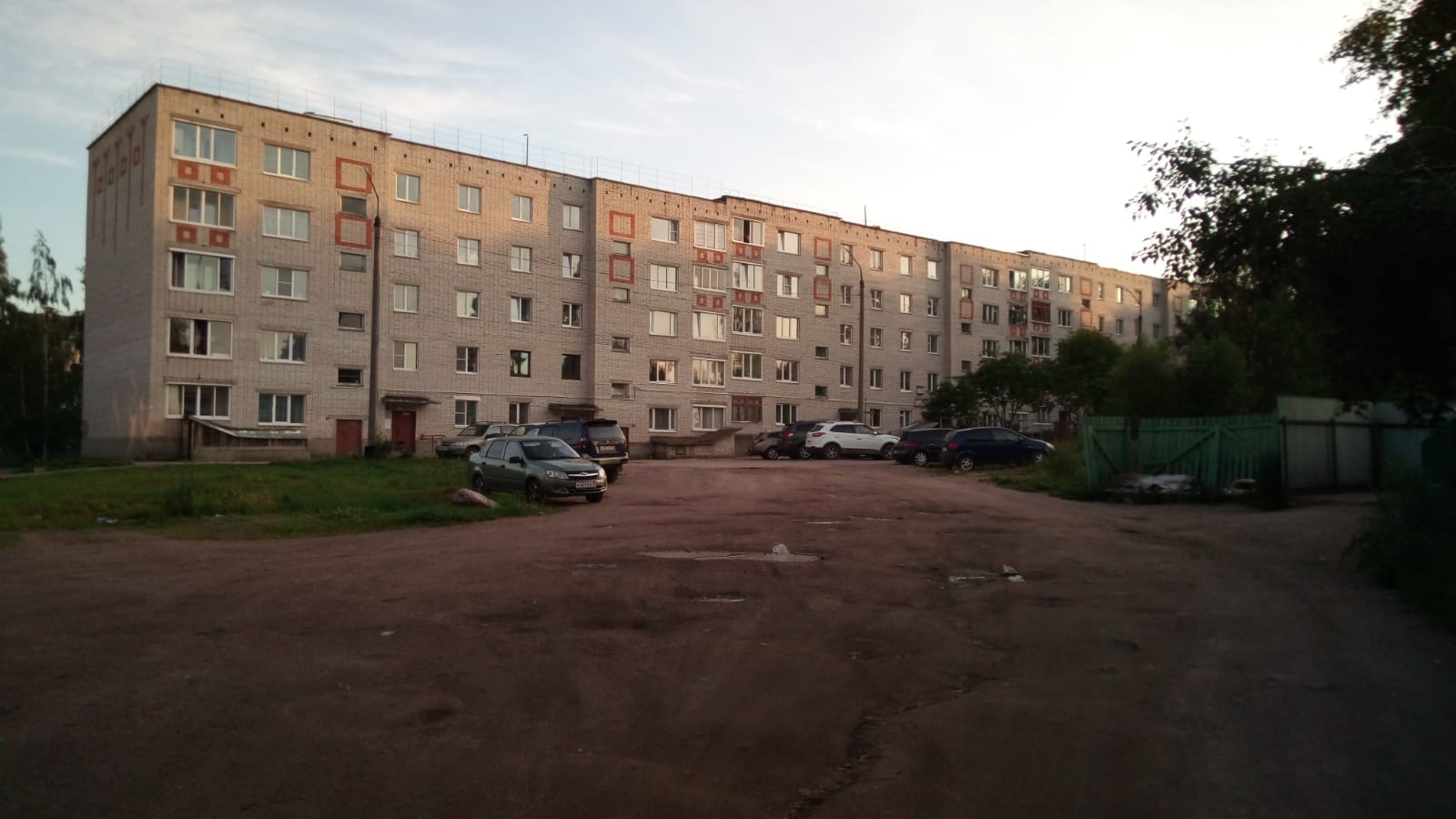 The owner said it is not safe to park outside the building and therefore we took the bikes to secure parking close by. Price was 4 euros for two bikes for overnight parking. 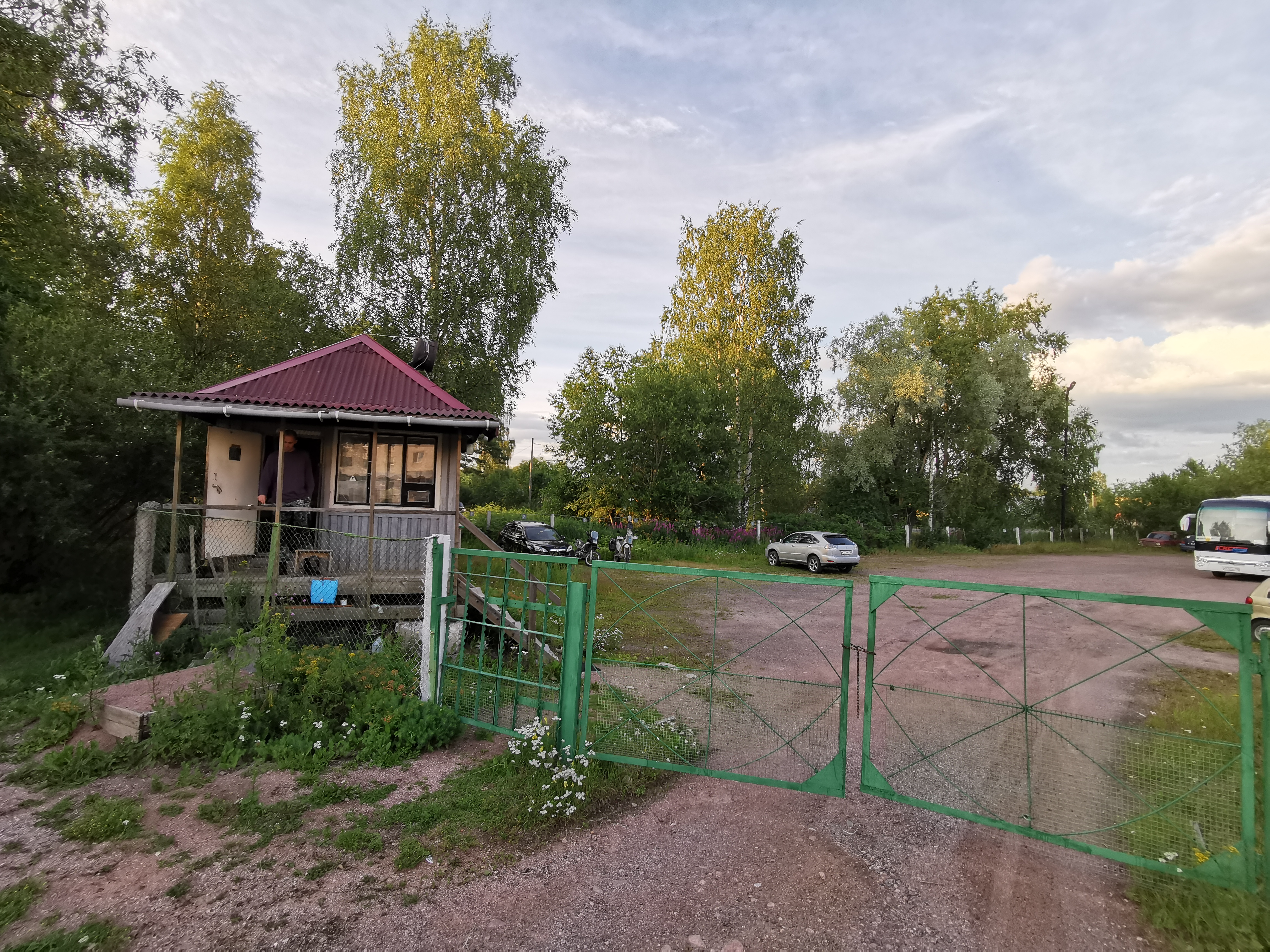 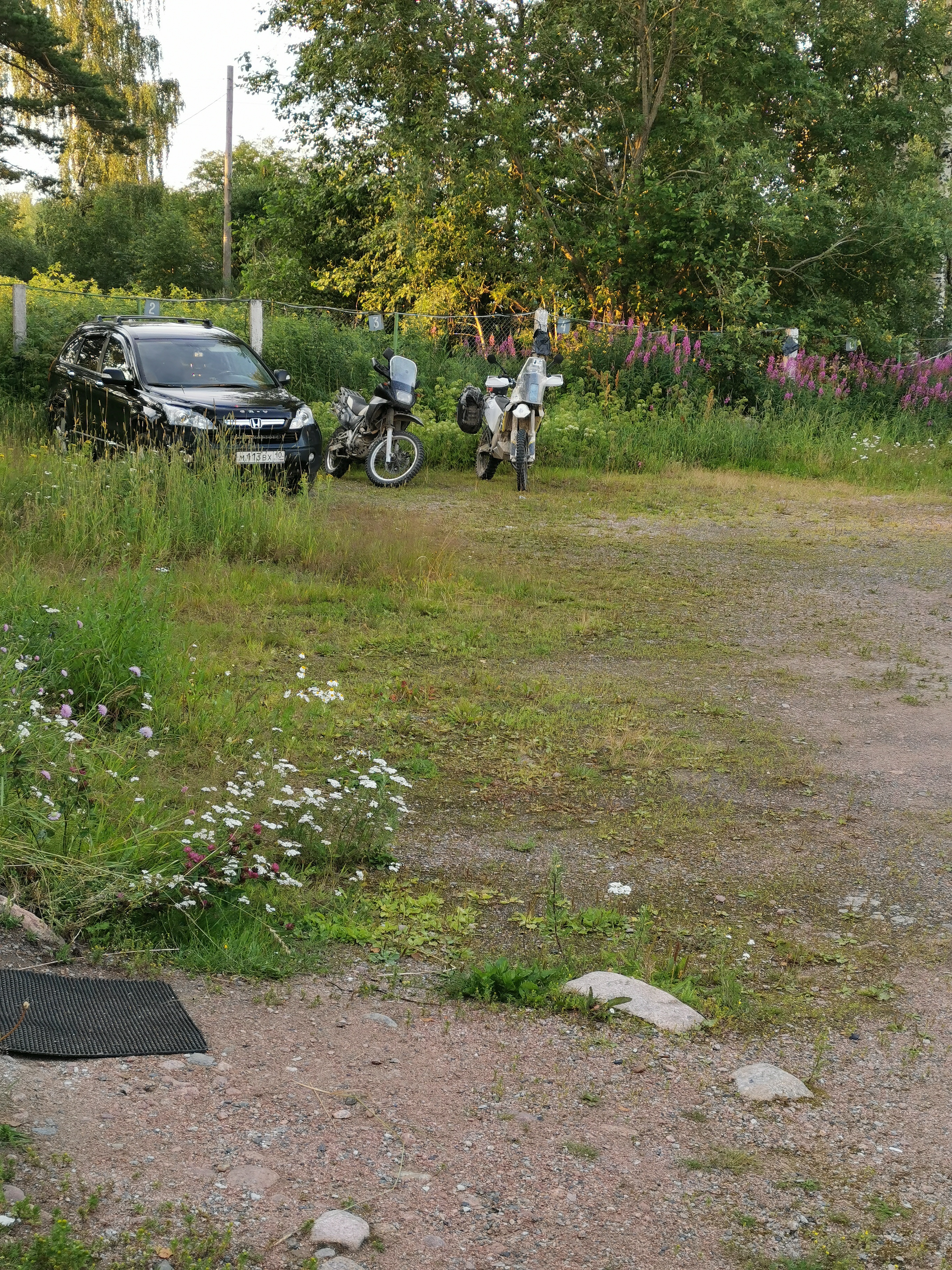 We had not eaten proper food after breakfast so we were very hungry at this point. Quick showers and then we headed to Baltika restaurant for heavy dinner. 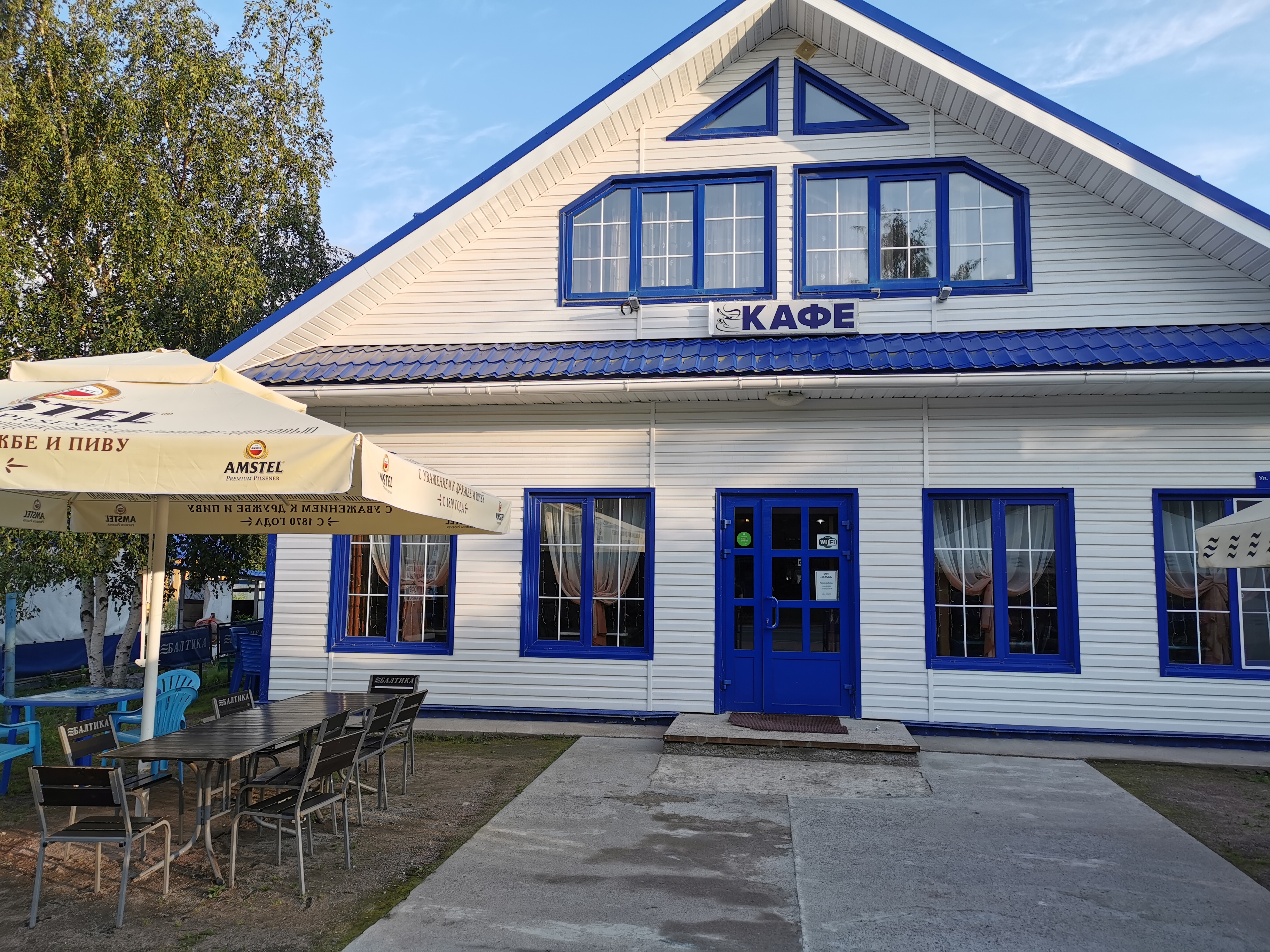 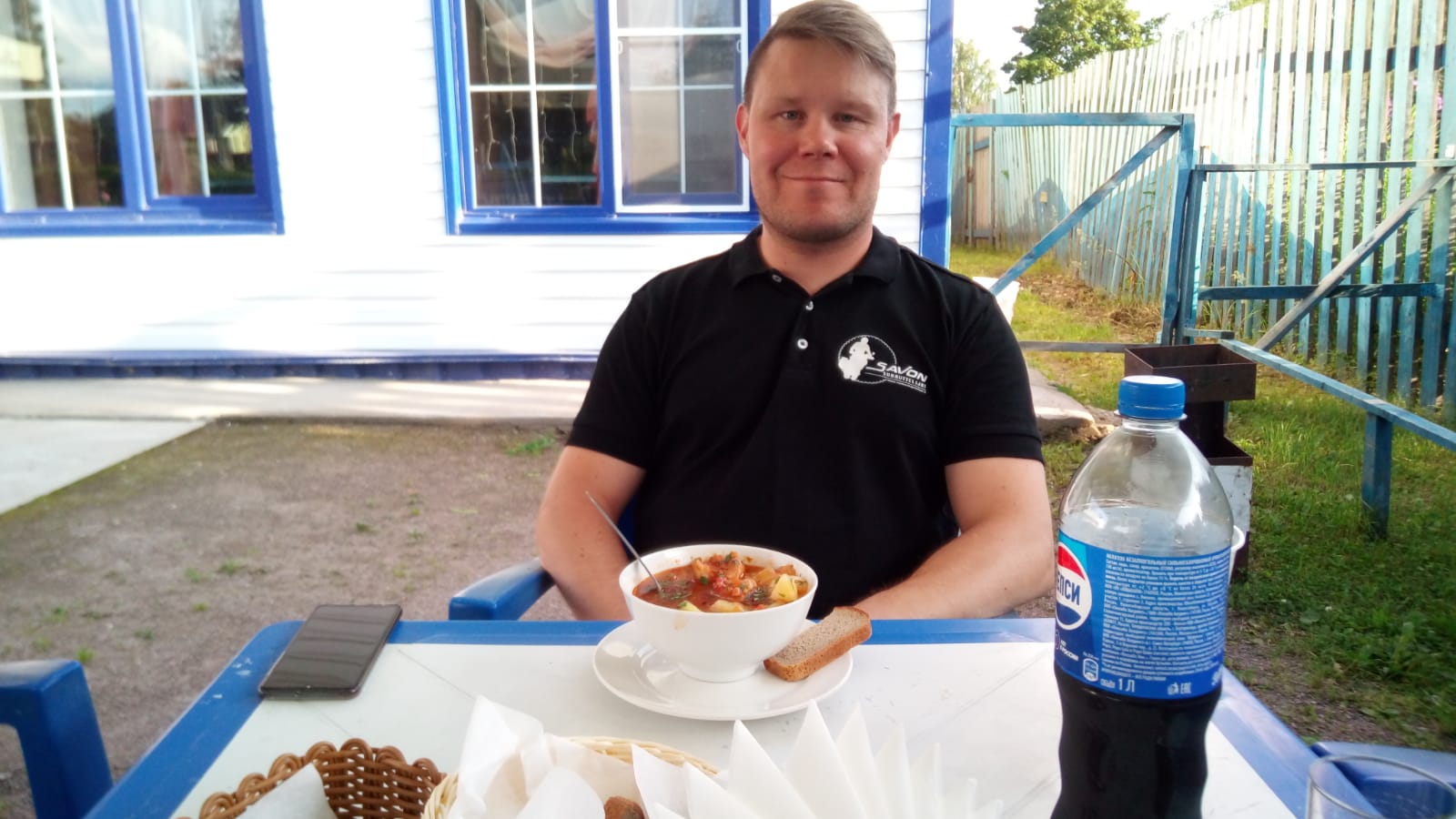 There was a cat at the terrace that kept us company. 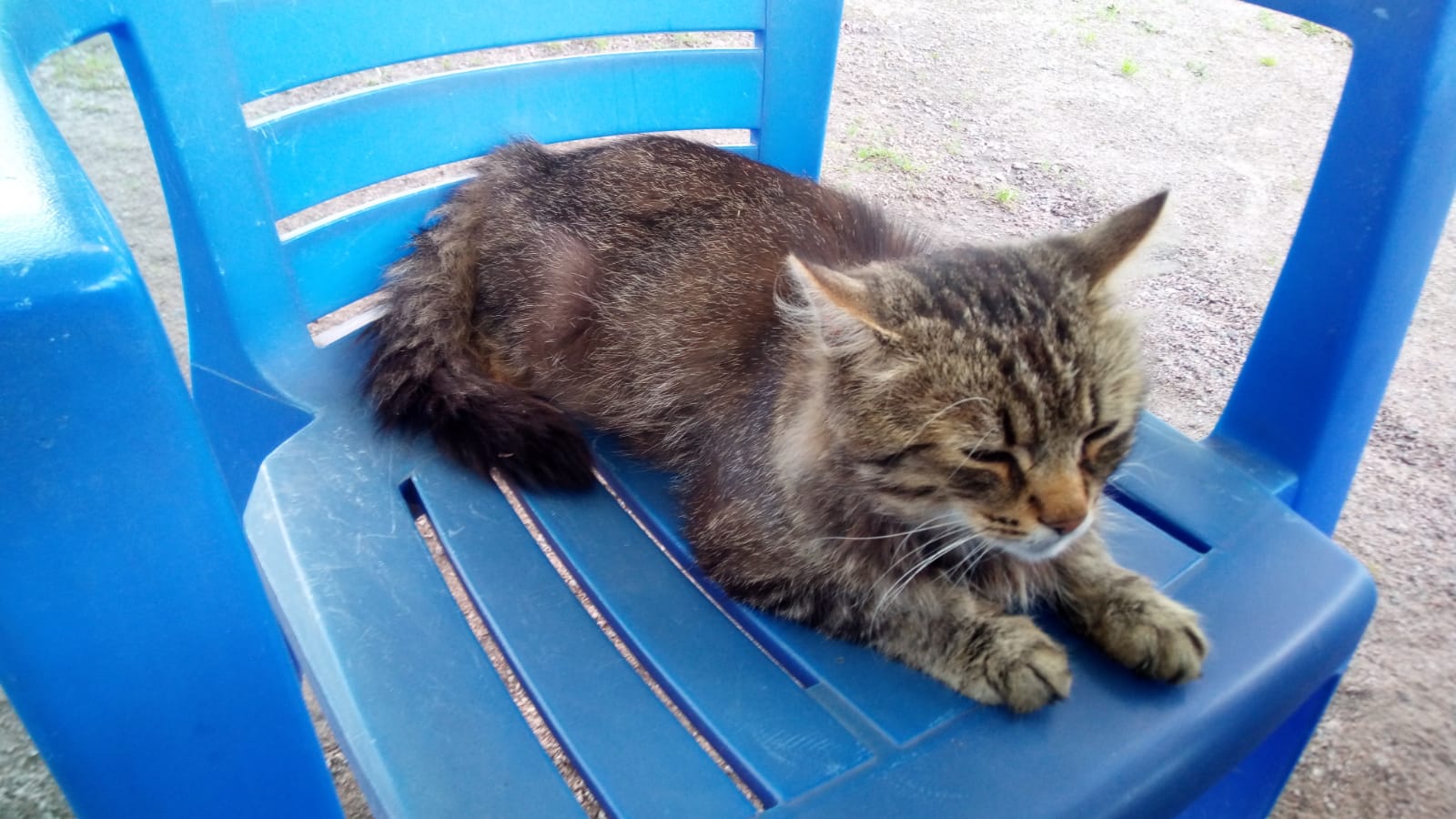 After the dinner we bought something for breakfast from local store and then got to the apartment. We spent the time talking about the trip since tomorrow is going to be the last day of the trip.